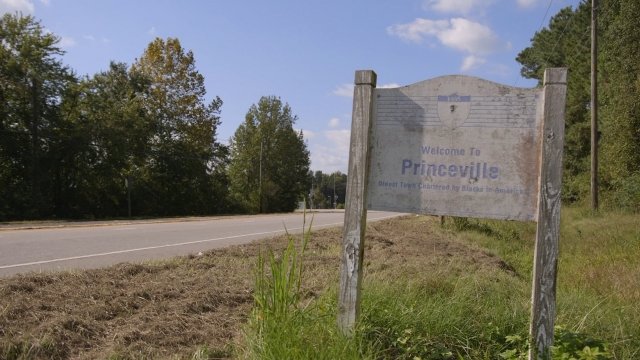 By Christian Bryant
October 4, 2018
Princeville, North Carolina, was spared by Hurricane Florence, but residents have weathered floods since the community was first created in the 1800s.
SHOW TRANSCRIPT

About 75 miles east of Raleigh, North Carolina, sits a small town with immense history. Princeville is the first U.S. town chartered by African-Americans.

But there aren't any statues memorializing the former slaves who created this community. Just some low-key signage and a town museum that's been gutted by flood damage.

That damage is one of the most notable details about Princeville. 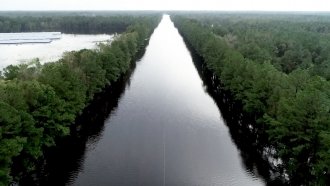 What A Bird's-Eye View Can Tell Us About Flood Devastation

Princeville is a low-lying area, and in 1999, Hurricane Floyd produced enough rain to make the nearby Tar River crest and submerge the town in as much as 23 feet of water in some parts.

Calvin Adkins is a Princeville resident who saw the devastation from Floyd firsthand.

He took Newsy on a tour: "This was built to help the keep the water from washing away Princeville. That's right. And it worked from '65 to 1999."

"The stoplight right there. You could take a boat and you could touch the stoplight with your hand. That's how much water was in Princeville," he said.

Jimmie Hilliard says floodwaters from Matthew were "bed-high" — meaning they reached his bed, which is several feet off the ground. 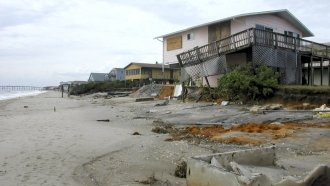 According to the town's website, Princeville has been flooded at least nine times since 1800.

He said: "After Matthew, man, I had dead chickens all in the cage because they couldn't get out. But this time, I turned them loose. I opened the gate and let them go."

Luckily, the residents are resilient.

Newsy's Christian Bryant asked, "Why do you continue to stay if it keeps flooding around here?"

Hilliard replied: "Well, like I said, this is mine. Don't nobody own this but me and my wife, and I don't owe a cent on it anymore in property tax."

Lee Black said: "We persevered, to a certain extent. There was a lot of people that lost everything they owned. Like with me. I lost everything twice, except for the clothes I had on my back."

Over the years, people like Black have lost items that would be perfect for the town's museum — items that could bring attention to Princeville outside of hurricane season.

"Like the old town hall. That was built in 1932, and I had pictures of it being built," Black said. "When Floyd came through, he just wiped out all of that."

Princeville is still reeling from Matthew. Since then, state and local officials have explored elevating structures, like this senior center, and buying out homes in more flood-prone areas to help make the town less susceptible to future flooding.

Meanwhile, at least some residents, like Black, are trying to find solace in what lies ahead.

"We've got a chance to rebuild, but in a new way. For a new generation."