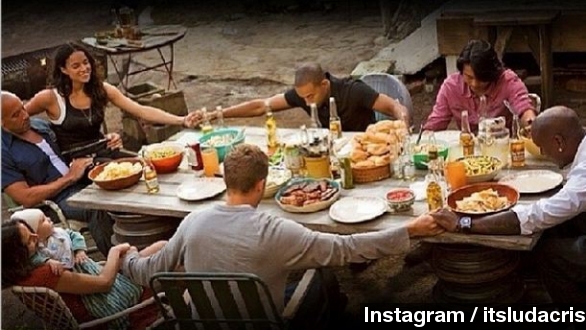 "The Fast and the Furious" co-stars are remembering franchise star Paul Walker — who died Saturday in a fiery car crash in California. Forty-year-old Walker had been in Santa Clarita for a charity event. He leaves behind a 15-year-old daughter. (Via Universal Pictures / "The Fast & The Furious 6")

Fellow franchise star Vin Diesel posted this picture to his Instagram account, with the message: "Brother I will miss you very much... Heaven has gained a new Angel."

Ludacris, another "Fast & Furious" co-star, wrote: "Your humble spirit was felt from the start, wherever you blessed your presence you always left a mark..."

And on Twitter, fans tweeted condolences to Walker's family.

TMZ first reported Walker’s death, saying the actor was a passenger in a friend's Porsche when the driver lost control of the car and slammed into a tree. Both lost their lives.

Walker was working on "Fast & Furious 7" at the time of his death. Earlier this year, he spoke with Empire Magazine about the franchise's surprise success.

WALKER: "Nobody thought this was gonna happen when we were making the first one. We were low risk. ... Nobody realized what they had."

The franchise is Universal's biggest ever, earning more than $2.3 billion at box offices worldwide. In a statement the film company said it was "heartbroken" at news of the star's death.