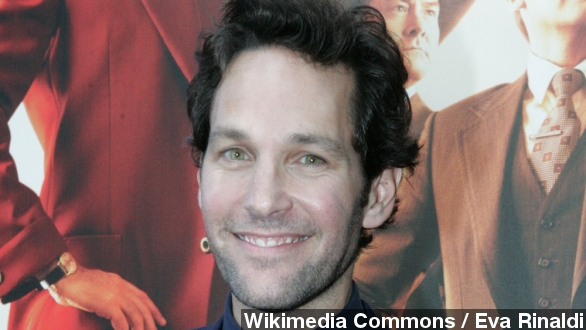 He's a brilliant crime-fighting scientist ... the size of a bug? Marvel's superhero flick might have gotten a big-name actor for a pint-sized leading role.

Paul Rudd has reportedly landed the title role in the upcoming "Ant-Man," according to an exclusive from The Wrap. However, the casting has yet to be confirmed by Marvel or director Edgar Wright.

Now, if you aren't quite sure who Ant-Man is, a writer for GeekNation explains what the character is all about:

"Ant-Man's alter-ego is Dr. Hank Pym, a biochemist who uses his latest finding — a group of subatomic particles — to create a size-altering formula, using himself as the test subject. ... Pym makes some tweaks to develop an instrument that helps him communicate with and control insects. Pretty cool, right?"

This superhero movie would mark a cinematic change for Rudd, who has previously stuck to mostly comedies, rom-coms and indie flicks. He plays sleazy field reporter Brian Fantana in the just-released "Anchorman" sequel. (Via Paramount Pictures / "Anchorman 2")

It's exactly that kind of deadpan, charming style that has Entertainment Weekly writer Darren Franich excited for Rudd's new superhero turn, saying, "It's hard to think of a better man for the job than Paul Rudd, who has a just-right mix of boyish good looks and everydude charisma."

He goes on to claim Rudd would have to be able to convince an audience of two things: the inherent humor behind a shrinking superhero and the legitimate power Ant-Man can actually wield. (Via Flickr / JD Hancock)

The film's director, Edgar Wright, is well-versed in nailing a sarcastic comedic style. His previous credits include "Shaun of the Dead," "Hot Fuzz," and "Scott Pilgrim vs. The World." (Via IMDb)