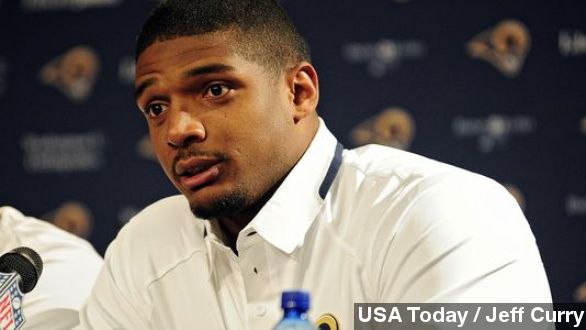 By Matt Moreno
May 16, 2014
According to ESPN's Darren Rovell, the Oprah Winfrey Network won't be filming openly gay athlete Michael Sam's journey to the NFL just yet.
SHOW TRANSCRIPT

It's been an eventful past few days for openly gay athlete Michael Sam — getting a chance to make an NFL roster, getting your life story told by Oprah — but one of those two isn't going to happen...for now at least.

The planned Oprah-produced documentary will be postponed according to ESPN's Darren Rovell.

Michael Sam, the first openly gay athlete drafted into the NFL, was selected in the seventh round by the St. Louis Rams.

It was later revealed the Oprah Winfrey Network, or OWN, planned to shoot a documentary about Sam's journey to the NFL. The Rams reportedly were unaware of these plans until they were announced. (Via Oprah)

NBC Sports posted this statement from Sam's agent: "After today's meeting with the Rams, we collectively feel it is best to postpone the project. This will allow for Michael to have a total focus on football, and will ensure no distractions to his teammates. Everybody involved remains committed to this project and understands its historical importance as well as its positive message.”

But, the decision to postpone the documentary may not be all that surprising.

One unidentified Rams player told ESPN he wasn't too fond of the idea. "It does raise eyebrows and it may be somewhat of a distraction."

And then there was a few conflicting reports stating the NFL knew about the OWN documentary deal and didn't tell the Rams or any other team. (Via NFL) (Via Sports Illustrated)

All this while Sam, a late draft pick without a contract yet and without a guaranteed spot on the team, tries to make the Rams' roster. (Via CNN)

And he has previously said he wants his sexual orientation to be far from the foreground.

Sam participated in the team's rookie workouts Friday. There's no word yet on when plans for the OWN documentary series might be put back in motion.