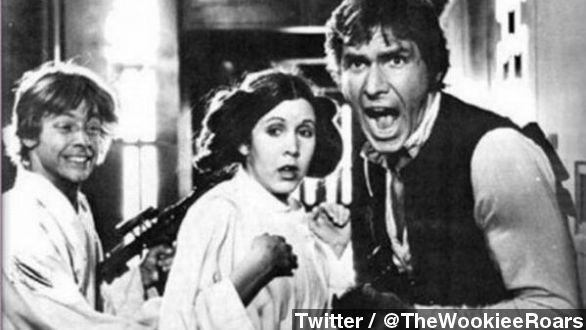 If the next "Star Wars" movie has as many twists as the real-life drama leading up to its production — Episode VII could be the best flick in the series. From potential plots to suspected stars — the hype has been a story all its own.

The latest talk has the film focusing on original characters — such as Jedi-in-waiting Luke Skywalker, originally played by Mark Hamill, Harrison Ford's Han Solo — that interstellar smuggler who made the Kessel Run in less than 12 parsecs and once found himself frozen in carbonite, and the princess who simply, or not-so-simply captured the hearts of both Solo and Skywalker — Carrie Fisher's Princess Leia.​ (Via Lucasfilm)

You'll recall Episode VII screenwriter Michael Arndt bailed back in October. Reports then cited concerns about getting the movie done in time.

But now The Hollywood Reporter instead suggests the issue was actually "a difference of opinion of which characters to emphasize."

According to CNET, "Arndt ... wanted to focus on a younger generation of heroes, specifically the children of Luke Skywalker, Han Solo, and Princess Leia, with the original stars playing supporting roles."

Now, it appears director J.J. Abrams has quite literally flipped the script. He and "The Empire Strikes Back" co-writer Lawrence Kasdan have been handling writing duties since Arndt's departure. Abrams is said to have been meeting with a host of potential actors for the new film. ​(Via Wikimedia Commons)

The latest actor on that list — Jesse Plemons, who played Todd on "Breaking Bad." No word on what role he'd play. (Via AMC / "Breaking Bad")