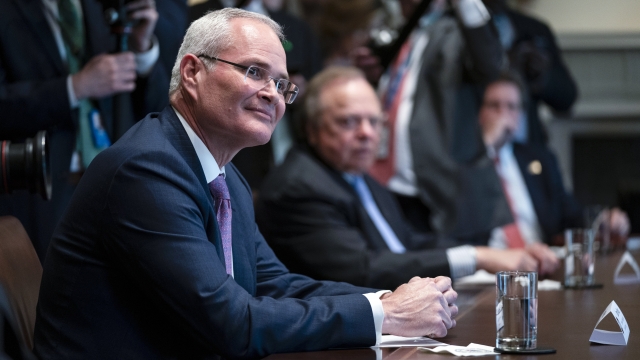 SMS
Oil Executives Testify On Climate Change, Alleged Disinformation
By Associated Press
By Associated Press
October 28, 2021
Lawmakers are investigating what they call a long-term industry campaign to mislead the public about the role of fossil fuels in global warming.

ExxonMobil’s chief executive said Thursday that his company "does not spread disinformation regarding climate change" as he and other oil company chiefs countered congressional allegations the industry concealed evidence about the dangers of it.

In prepared testimony at a landmark House hearing, CEO Darren Woods said ExxonMobil "has long acknowledged the reality and risks of climate change, and it has devoted significant resources to addressing those risks."

Woods was among top officials at four major oil companies set to testify as congressional Democrats investigate what they describe as a decadeslong, industry-wide campaign to spread disinformation about the role of fossil fuels in causing global warming.

The much-anticipated hearing before the House Oversight Committee comes after months of public efforts by Democrats to obtain documents and other information on the oil industry’s role in stopping climate action over multiple decades. The appearance of the four oil executives — from ExxonMobil, Chevron, BP America and Shell — has drawn comparisons to a high-profile hearing in the 1990s with tobacco executives who famously testified that they didn't believe nicotine was addictive.

The committee released a memo Thursday charging that the oil industry's public support for climate reforms has not been matched by meaningful actions, and that the industry has spent hundreds of millions of dollars in recent years to block reforms. Oil companies frequently boast about their efforts to produce clean energy in advertisements and social media posts accompanied by sleek videos or pictures of wind turbines.

Lawmakers have focused particular ire on Exxon after a senior lobbyist for the company was caught in a secret video saying that Exxon had fought climate science through "shadow groups" and had targeted influential senators in an effort to weaken President Joe Biden’s climate agenda, including a bipartisan infrastructure bill and a sweeping climate and social policy bill currently moving through Congress.