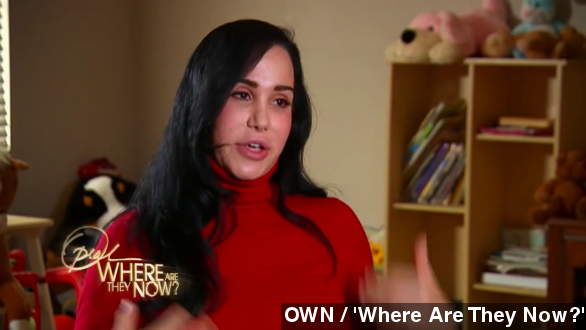 By Briana Koeneman
January 14, 2014
Nadya Suleman, a.k.a Octomom, has been charged with welfare fraud after apparently failing to report $30,000 in earnings.
SHOW TRANSCRIPT

Nadya Suleman, a.k.a Octomom, made headlines Monday after being charged with welfare fraud. (Via WTTE)

According to a DA news release Monday the mother of 14 is being charged with one count of aid by misrepresentation and two counts of perjury by false application for aid. (Via OWN / "Where Are They Now?")

According to CNN, that extra cash came at least in part from Suleman's gigs as a topless dancer, adult film actress and other appearances.

In the weeks following Suleman's infamous pregnancy and birth, she was showered with book and movie deal offers and tons of free baby stuff. (Via TMZ)

But once her instant stardom began to fade, Suleman's debts began to pile up, and she had to find other ways to support her 14 children.

According to her lawyer, Suleman's arraignment is scheduled for Friday. If convicted, she could face more than five years behind bars.