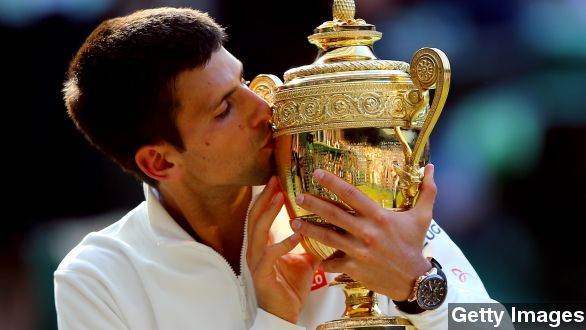 In their 35th meeting, two tennis titans played a memorable five-set match that ended with the soon-to-be top-ranked player in the world outlasting one of the best grass court players of all time to win the Wimbledon title.

Despite blowing a 5-2 lead in the fourth set, Novak Djokovic rebounded in the final set to beat Roger Federer and capture his second career Wimbledon Championship Sunday. (Via Getty Images)

And while Federer is know for his killer instinct, especially on the world's largest stage, he was not able to turn Djokovic's poor fourth set into a record-breaking eighth Wimbledon title.

The win for Djokovic pulls the tennis star out of a year-long grand championship title slump. While Djokovic was the number two player in the world going into Wimbledon he had lost five of his last six attempts in final matches before Wimbledon. (Via Getty Images)

​The New York Times says Djokovic's recent struggles could have been just the push he needed writing, "All those thoughts had to be in the back of his mind as the match on Sunday looked to slip away."

Djokovic dedicated the hard-fought match to his fiancee, his soon-to-come child and his first coach who died last year. He also called the championships at Wimbledon "The tournament I always dreamed of winning." (Via Getty Images)

The title match between Djokovic and Federer had put two of the most accomplished players in the sport right across from each other. Between the two tennis greats are 124 titles and 25 major championships.