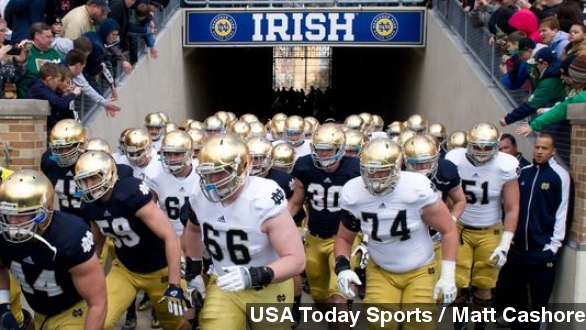 By Matt Moreno
May 29, 2014
Notre Dame and Penn State may both be holding football camps at Georgia State in Atlanta, much to the chagrin of SEC coaches.
SHOW TRANSCRIPT

Look out SEC teams! Notre Dame and Penn State are moving in, and they're most likely not interested in being friendly neighbors.

247Sports.com reports Notre Dame, along with Penn State, are looking to hold satellite football camps deep in the heart of SEC territory. The site says the Fighting Irish working on a deal with Georgia State University, located in Atlanta, to host a satellite camp there.

That's about as smack-dab in the middle of Southeastern Conference country as you can get.

As the Orlando Sentinel puts it, "There is a good old-fashioned turf-war brewing in college football."

247Sports.com writes, "This is a brilliant move by the Notre Dame coaching staff. ... Because recruiting is based on relationships, any personal time goes a long way in establishing comfort level in relationships."

But, while SEC coaches aren't happy about Notre Dame and Penn State infringing on their recruiting territory, it's apparently okay in the eyes of NCAA thanks to a loophole. (Via Big Ten Network, Bleacher Report, Ledger-Enquirer)

Fox Sports explains, "NCAA rules prohibit coaches from running camps more than 50 miles from their respective campuses. What the NCAA does not prohibit, however, is coaches participating in camps more than 50 miles from their campuses. That would be against the rules only if a conference says it is, and the SEC is one conference that doesn't allow its coaches to do this. "

While there's no set date for when Notre Dame may hold their camp at Georgia State, Penn State is slated to hold their's June 10.