Not Going Quietly: Sterling Backs Out Of Clippers Deal 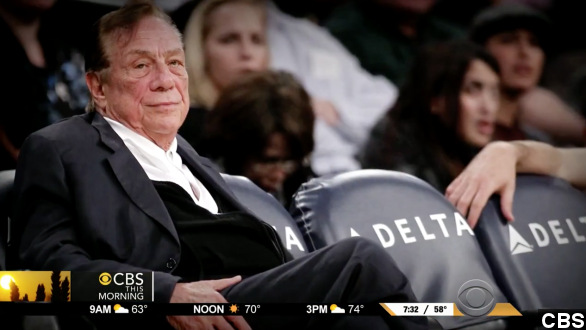 SMS
Not Going Quietly: Sterling Backs Out Of Clippers Deal

By Danny Matteson
June 10, 2014
Just last week Donald Sterling seemed accepting of the deal to sell the Clippers. Now in a letter he says he intends to fight to keep the team.
SHOW TRANSCRIPT

It looked like it was over — the Sterlings were bowing out, and the NBA's Los Angeles Clippers were now, for the hefty pricetag of $2 billion, the property of former Microsoft CEO Steve Ballmer. Well, not so fast.

On Monday, Donald Sterling pulled out of a deal with Ballmer, saying in a statement: "I have decided that I must fight to protect my rights. …  I love the team and have dedicated 33 years of my life to the organization. I intend to fight to keep the team." (Via HLN)

If that's not clear enough, the title of the one-page statement? "The Team is not for Sale." Loud and clear, Donald.

Oh, and that $1 billion lawsuit Donald had lobbed at the NBA? That's apparently back on. LA's KNBC quotes his attorney saying he has been instructed to "prosecute" the lawsuit.

It was just last week that 80-year-old Donald was seemingly accepting of the deal to sell the Clippers. So why the change of heart? According to a commentator from ESPN Los Angeles, it was in the details. (Via CBS)

"There was one key thing he didn't get, which I think he assumed he would — and that is the NBA would drop its lifetime ban of him and rescind the $2.5 million fine." (Via ESPN)

As USA Today reports, Donald's lawsuit alleges the NBA violated his rights by relying on info from an "illegal" recording to oust him. He also claims forcing him to sell the team violates antitrust laws.

But thanks to the terms put in place by Donald's wife, Shelly, going after the NBA could, in a roundabout way, actually be going after himself.

MarketWatch writes, "Sterling will effectively be suing himself, seeing as how his wife Shelly has reportedly agreed to indemnify the NBA and use the Sterling Family Trust to cover any losses."

As Sports Illustrated notes, he was declared "mentally incapacitated" in May, a diagnosis his attorneys have denied. That left his wife, Shelly, as the sole trustee of the family trust — with full authority to sell the team.

For its part, the NBA wasn't exactly blindsided by Donald's 180. In an interview over the weekend, NBA Commissioner Adam Silver told CNN's Rachel Nichols:

"There's well-known incidents in the league when he was right there at a closing and at the last minute decided not to sell. Until he signs that document, we still have a pending litigation with him."

Shelly has yet to comment on the situation. If the Clippers were to sell for $2 billion, it would be the most an NBA team has ever sold for.