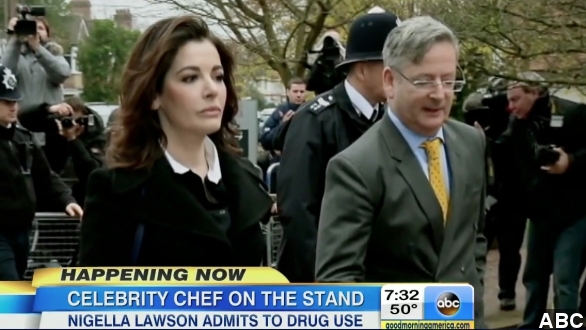 By Christine Slusser
December 5, 2013
In a shocking twist in a high-profile court case, Nigella Lawson has admitted to using both cocaine and marijuana. She said she&#039;d rather be honest.
SHOW TRANSCRIPT

In a rather shocking twist in a high-profile court case, celebrity chef Nigella Lawson has admitted to using drugs. She said it was only a handful of times, during difficult moments in her life.

"Nigella Lawson has now admitted to cocaine and marijuana use. She was testifying against two former assistants in a fraud case. ... She says her ex-husband Charles Saatchi has been spreading the rumor that she's an addict." (Via WNYW)

"Good Morning America" reports Lawson said she wasn't proud of taking drugs, but says she'd rather be honest and ashamed than lie. She said she has taken cocaine a total of seven times, and said she, herself, is on trial.

"TODAY" reports Lawson used the cocaine when her first husband was dying of cancer, and only once during her marriage to advertising mogul Charles Saatchi.

Nigella said it has been at least three years since she has used cocaine. ​New York Daily News says 35-year-old Francesca and 41-year-old Elisabetta Grillo were former personal aides for Lawson, and are on trial for allegedly spending $1 million on credit cards that belonged to both Lawson and her ex-husband Saatchi.

The 53-year-old star of The Taste on ABC was grilled for hours on the stand by their attorneys.

As for the tumultuous relationship between the two, it first made headlines over photos of him apparently grabbing her neck. Saatchi said he was just trying to make her focus. The two are now divorced.

The sisters have denied committing fraud, and said Lawson allowed them to use the credit cards.