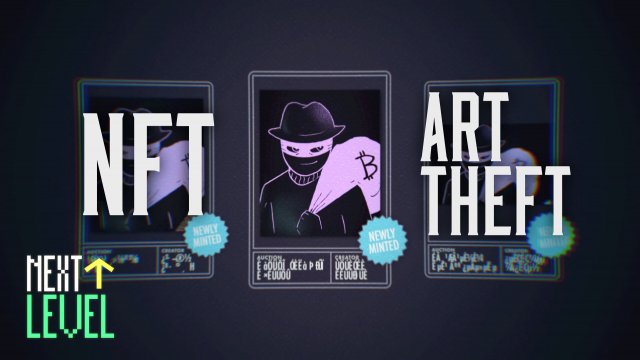 SMS
NFT Art Auctions Have A Piracy Problem
By Matt Picht
By Matt Picht
May 18, 2021
Artists are seeing their work sold by strangers on NFT sites without their consent — and there's no easy way to stop it from happening.
SHOW TRANSCRIPT

They're stirring up Hollywood controversies; they're reinventing the sports trading card market; they're resurrecting ancient memes for profit. The blockchain-based collectibles known as NFTs are showing up everywhere right now, especially in the marketplace for digital art.

Creators who tie their work to an NFT can sell the token off for a sometimes sizable profit. But as the NFT gold rush grows, so too does the incentive for piracy.

More and more artists are finding their work has been made into NFTs without their consent — and there are no clear safeguards to stop it from happening.

Pseudonymous artist Sabby Life works primarily in virtual reality, painting digital 3D sculptures with VR painting programs like Tiltbrush. She told us she's still neutral on whether NFTs will end up being good for the art community or not.

Sabby hasn't decided whether to get into NFTs herself: but someone else made the decision for her. A token of her piece "Winter Landscape" went up for sale on VR NFT for around $332 dollars — without her knowledge.

She told Newsy, "A fellow artist privately messaged me and said, 'Did you get permission for this website to mint your art?' And of course not because I haven't even set up a wallet, you know, I'm not even on the blockchain."

"I was very upset. And I went straight to Twitter about it, you know, and it wasn't just my art, it was other artists that I know, and the entire point of NFT's and, and the blockchain is to support the actual artists.

And this is the only art that we know about, because it was caught. So how many other pieces out there are being sold? That we don't know about?"

An NFT, or non-fungible token, works off the same blockchain technology that supports cryptocurrencies like Bitcoin and Ethereum. Instead of minting new cryptocurrency, NFT miners turn their blocks into certificates, embedding a link to a specific piece of media, and then selling those certificates on to buyers who want a collectible tied to that media object.

The trouble is, anyone can create an NFT out of anyone else's work: there's almost no oversight on many NFT platforms to ensure an auction is tied to the actual artist. Since NFTs are kind of a new trend, there's a lot of legal uncertainty for artists who's work's been pirated.

David Gerard is a journalist and author who's extensively covered blockchain-based technologies. He's somewhat skeptical about how it's currently being used.

He told us, "Cryptocurrency is a multi-layered fractal lasagna of bad ideas."

An NFT doesn't actually include any artwork — only a link to it — which makes it hard for artists to assert copyright or ownership over a crypto-token that references their art. But the platforms actually auctioning the NFTs do display the artwork tied to the token — which does open those sites up to copyright claims.

"To their credit, most NFT sites do respect that, so that's good," Gerard said. "Because they are on frankly, dodgy legal ground already. So you know, being responsive is probably good."

Pirated NFTs are bad enough in their own right, but it can especially sting for artists who have strong objections to blockchain-based art sales. Crypto-economies require ecologically devastating amounts of energy to maintain, and the fragility of the nascent market has convinced a lot of artists that the environmental cost isn't worth the potential gain.

Artist Connor Bell told Newsy, "In the beginning, like back in fall 2020 when it was taking off, there was very little discussion about the environmental imapcts. And I was just like, 'Hey, why are people calling themselves environmental activists when they're minting NFTs?'"

Bell is a digital artist who designs fractal animations. His artwork showed up on the NFT seller OpenSeas despite his skepticism about the concept.

Bell said, "My animation was in a trading card, and there was a link to the source where it was. So they refer to the source, they like credited me, but they were selling an item with my artwork on it."

"I had been critical of NFT's  before that anyway. So I was just like, 'Hey, guess what, my artwork was stolen.'"

Engaging with the NFT market can take a social toll as well as an environmental and financial one. Bell told Newsy he's faced waves of harassment from his public objections to NFTs, and Sabby says she's noticed rifts forming in digital art spaces over NFTs.

Sabby told Newsy, "It's sad. It's not really spoken, but I see it, you know, maybe they're not liking their posts as much or, you know, actually, people will unfriend you if you mention that."

And Bell added: "I know some people firsthand who are like, this is helping me make rent. This is really good for me right now. And I totally feel for those people. My problems are with the unstoppable army of affluent tech bros who just constantly sell NFTs and shut down any criticism."

Ultimately, Sabby and Bell were both able to get their work removed from the NFT sites after raising the issue on social media. But there are a plethora of different NFT sellers out there: trying to police every NFT auction of your work could quickly get exhausting.

There are a few NFT projects that are trying to address art theft. The Pastel blockchain is floating an AI-driven image detection algorithm to detect duplicate uploads to the network. And NFT registration service Artory use independent researchers to verify their tokens line up with the right artists.

But those kinds of concepts have yet to be implemented on a broader scale. Until they are, the NFT market seems like it'll continue to be a haven for piracy and a contentious subject for the art community.