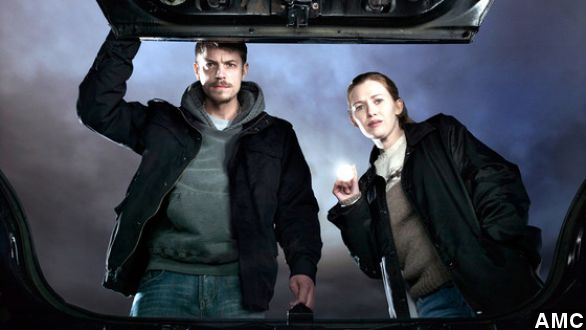 By Matt Picht
November 16, 2013
Netflix is bringing AMC's twice-cancelled crime drama "The Killing" back for another season.
SHOW TRANSCRIPT

"The Killing" just will not stay dead. After being cancelled by AMC — twice — the gritty crime drama is getting a fourth season thanks to Netflix.

Based on a Danish crime series, "The Killing" follows two homicide detectives solving murder cases around Seattle. The series premiered on AMC in 2011 to favorable reviews, but the show's ratings fell after the first season's finale.

The series was originally axed in 2012 after its second season wrapped up. But AMC brought it back this year for a third season — thanks in part to financial help from Netflix. (Via TV.com)

And after a lackluster run this summer, AMC cancelled "The Killing" again two months ago — leaving Netflix free to swoop in and pick up the tab for a final, six episode run.

Netflix vice president Cindy Holland said in a statement "The rich, serialized storytelling in The Killing thrives on Netflix, and we believe that it is only fitting to give [main characters] Sarah Linden and Stephen Holder a proper send-off." (Via USA Today)

​The show's rare double resurrection has one Entertainment Weekly writer wondering if anything can stop "The Killing."  "Unless the final shot of season 4 is Linden and Holder skewered on top of the Space Needle, there’s always going to be a few fans wondering if The Killing could rise again."

And Netflix has some success bringing back old shows. The service produced a fourth season of cancelled comedy "Arrested Development".

The Verge notes Netflix's recent push to create its own content has given less popular shows a way to get around the typical demands of the television industry.

"Netflix is demonstrating once again why it's a compelling option for customers. To creators of shows like The Killing, who may find their artistic ambitions cut short by politics and the reality of modern ratings systems, it's proving why Netflix is a compelling home for original programming."

No word yet on when to expect this new season of "The Killing", but all three previous seasons are currently available on Netflix.