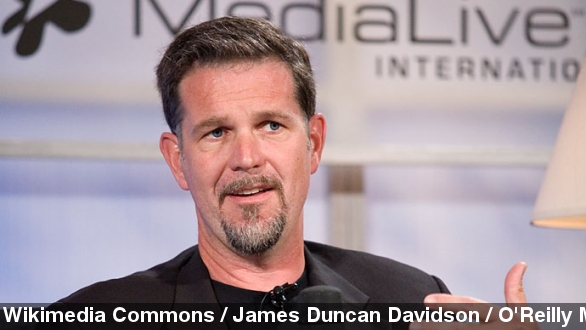 Looks like 2014 is going to be a pretty good year for Netflix CEO Reed Hastings.

"Netflix stock performance is giving CEO Reed Hastings a 50 percent pay bump next year. His salary will go from $2 million to $3 million, and he gets an extra million in stock options." (Via WYFX)

According to a regulatory filing by the company, in all, Hastings is set to receive $6 million in total pay. That's $2 million more than he was given at the beginning of last year. (Via Variety)

But CNN notes his final 2013 salary is expected to be notably higher than that because of Netflix's wild success in the stock market this year.

Netflix shares are reportedly up almost 300 percent this year, which makes one of the top performing stocks in both the Standard & Poors 500 index and Nasdaq 100 in 2013. (Via WNYW)

However, as TechCrunch points out, the company isn't exactly swimming in profits. Netflix reported making only $32 million in its most recent quarterly report.

But that hasn't stopped the company from flourishing.

The news of Hastings' pay bump comes right after Netflix decided to cancel its poison pill plan two years before its original expiration date after investor Carl Icahn sold half of his shares in the company. The stockholder rights plan was intended to prevent a hostile takeover. (Via Daily Finance)

Hastings isn't the only Netflix executive who'll be raking in more green in 2014. The company's chief content officer and the chief product officer are also reportedly recieving salary bumps.