NBC Planning Another Live Musical After 'Sound of Music' 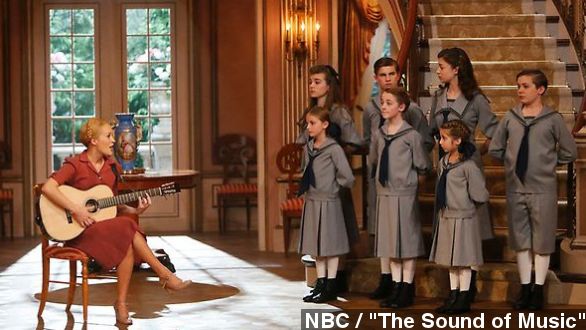 SMS
NBC Planning Another Live Musical After 'Sound of Music'

By Jasmine Bailey
December 10, 2013
Less than a week after NBC's live broadcast of "The Sound of Music" pulled in big ratings, the network announced another live show for next year.
SHOW TRANSCRIPT

It hasn’t even been a week since “The Sound of Music” aired on NBC and the network has already announced plans for another live musical for next year's holiday season.

"NBC Chairman Robert Greenblatt said Tuesday they are 'circling a couple of titles,' looking at family-friendly Broadway classics everyone knows and loves. No word on when or what." (Via WTVJ)

Grennblatt also said, “All weekend, people have been calling us and emailing us … Rights holders of musicals have said, ‘Please do one of our shows.’ We’re excited to try it again.” (Via The New York Times)

Last week's live show had incredible ratings, with some 18.6 million people tuning in to watch Carrie Underwood star as Maria von Trapp. (Via NBC / "The Sound of Music")

But the ratings and reviews weren't quite in line with each other. A lot of viewers walked away pretty disappointed with Underwood's performance.

The Daily Beasts' Kevin Falon called it, "painfully lifeless and amateur throughout the first two thirds of the lengthy ordeal. The singer, it seems, is a proud graduate of the school of 'If I don't blink, they'll think I'm acting!'"

And even NBC’s own Saturday Night Live poked a little fun. (Via USA Today)

KATE MCKINNON “A song is when you put notes together in a certain order and notes are the noises you make with your mouth and that's music... Re."

KRISTIN WIIG "The guy in the barn that tries to lay on me."

But regardless of the reviews — most of which compared Underwood unfavorably to Julie Andrews — NBC executives defended Underwood, saying she delivered to her audience. (Via 20th Century Fox / "The Sound of Music")

And Carrie wrote on Twitter, “Plain and simple: Mean people need Jesus. They will be in my prayers tonight.”

Reviews aside, when it comes to ratings, a number like 18 million doesn’t lie — which is probably a big reason why NBC is going for a round two. The next live musical is expected to be produced by Neil Meron and Craig Zadan, the same duo who worked on "The Sound of Music."