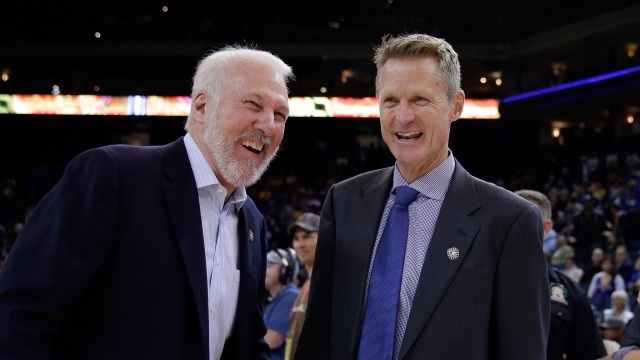 We're only a few days into Donald Trump's presidency, and the NBA's two leading coaches are already publicly criticizing the new administration.

San Antonio Spurs coach Gregg Popovich was asked about the Women's March on Saturday, heading into the Spurs' matchup with the Cleveland Cavaliers.

"Today was great. That message is important," said Popovich.

He spent the next four minutes or so railing against the new president.

While talking about his short stint with the Orlando Magic, Kerr guessed that he may have scored 14 total points as a member of the team.

Steve Kerr on his in unmemorable, short Magic career: "Sean Spicer will be talking about my career any second. 14,000 points." pic.twitter.com/XvvuUfKoNW

"Sean Spicer will be talking about my career any second. 14,000 points — greatest player in Magic history," Kerr joked.

But Kerr isn't the only one joking about Spicer and the new administration's first press briefing. A search for the hashtag #SpicerFacts on Twitter pulls up tons of tweets.

"Everyone knows Beyoncé was the weak link in Destiny's Child. Period." #SpicerFacts pic.twitter.com/jIWuYHb7bS

“The Death Star had no design flaws. Period.” pic.twitter.com/mZBB4MnPLm

"You're free to leave the Hotel California whenever you'd like." #SpicerFacts pic.twitter.com/hce2BSTjtH