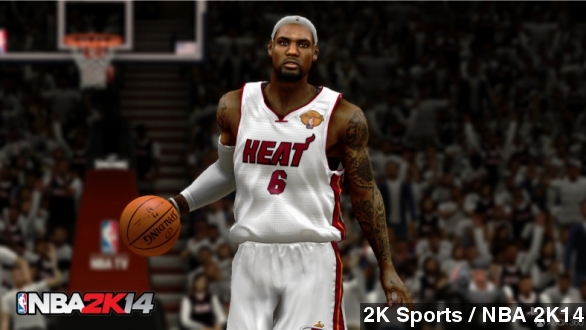 By Christian Bryant
December 3, 2013
One Xbox gamer experienced a new feature when he got a penalty in the game for using foul language in the real world.
SHOW TRANSCRIPT

Fans of the video game NBA 2K14 might want to watch their language in real life because it could have some in-game implications.

Just ask the guy who got T'd up for a heavy F-bomb.

"That's ridiculous! I can't curse in my own house? I spent $530 on an Xbox One and you're going to penalize me?" ​(Via YouTube / randomfrankp)

The gamer was playing the Xbox One version of 2K14 using Kinect, a device sensitive to motion, voice commands ...

According to Time, Jeff Thomas from 2K sports said "This was a feature we incorporated to NBA 2K13 that we felt brought both realism to the game, and a more civilized online environment for our players." Thomas added the game incorporates "a list of curse words or expressions that will trigger a technical foul when used during online play."

2K Sports Senior Producer Erick Boenisch said the new features in 2K14 are a part of an effort to bring more of the real world into the gaming world. One of those features is called NBA Today, which streams info from the NBA and throws it into the gaming system. (Via YouTube / FranchisePlaySports)

A writer for Kotaku points out the developers of FIFA 13 were the first to experiment with Kinect-supported cursing penalties, but the concept broke down because handing out two yellow cards to the same player would get them dismissed from the game — just as in real life.

But that doesn't mean you won't get at least a soft warning about your temper.

A gamer playing FIFA 14, the current version, got this message from the in-game Manchester City Board of Directors. It reads "Please try and refrain from using such colorful language in the future and control your overly aggressive nature." (Via Reddit / RossBoomsocks)

Back to NBA 2K14, a writer for GeekWire calls the frustrated gamer's video both "amazing" and "creepy," noting Kinect is actually listening, not just taking commands.

We're not exactly sure if the no-cursing feature can be shut off, but a writer for Bleacher Report says, "the console seems ready to pick up on more and more of our movements and language, a concept that has garnered a great deal of praise as well as criticism for Microsoft's newest foray into video games."

I'm guessing 2K15 will include an electric shock through the controller for gamers using more colorful language. You've been warned.