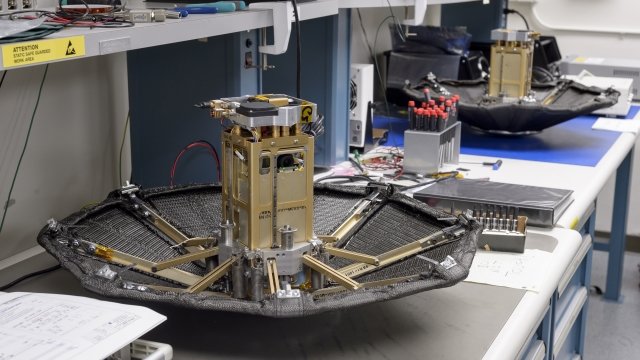 By Sebastián Martínez Valdivia
September 12, 2018
The new heat shield is foldable, so it can be stored in rockets with a smaller diameter than itself.
SHOW TRANSCRIPT

NASA tested a new foldable heat shield on Wednesday and it's basically an umbrella, but for atmospheric entry.

That frame folds up, so the system could take up less space than conventional heat shields. NASA says that opens up the possibility of designing rockets with much bigger payloads. The test units are 28 inches in diameter when deployed.

Aside from insulating spacecraft from the heat of atmospheric entry, ADEPT would also slow them down as they go — think Mary Poppins.

NASA projected its flight test Wednesday wouldn't go high enough to generate significant heat, and says its next step is to test the technology at "higher orbital speeds."