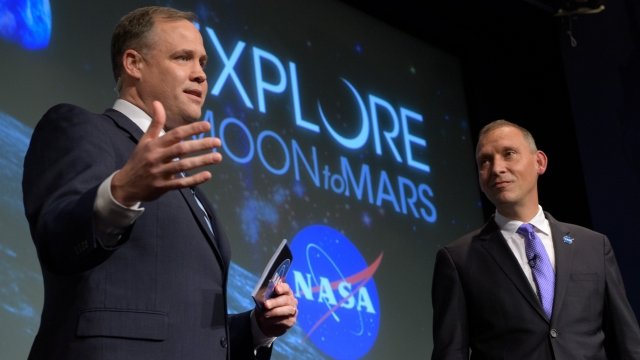 SMS
NASA Outsourcing Next Moon Landing To Private Company
By Ahmed Jawadi
By Ahmed Jawadi
November 29, 2018
​The contracts could be worth up to $2.6 billion over a span of 10 years.
SHOW TRANSCRIPT

NASA announced Thursday nine private companies will compete for billions of dollars in contracts to help deliver its science and technology payloads to the moon.

NASA's Commercial Lunar Payload Services program is a new strategy for the agency. Instead of relying on its own engineers to design and build a spacecraft capable of going to the moon, NASA will task other companies with figuring that out. And with those companies' help, it will send various tech and science experiments to the lunar surface.

Some of the companies vying for the opportunity are Lockheed Martin, Firefly Aerospace and Orbit Beyond.

The contracts could be worth up to $2.6 billion over 10 years. NASA said the first mission might be as early as next year, and it plans to send two payloads to the moon annually for the next decade. The first payloads would be relatively small, but the hope is that, in time, NASA will be able to send a crew to the moon.

Last year, the Trump administration formally directed NASA to focus on sending humans to the moon with the eventual goal of going to Mars.