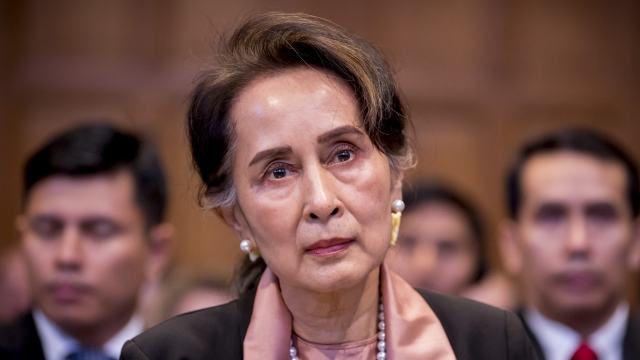 "We pray the court to refrain from taking any action that might aggravate the ongoing conflict," Myanmar civilian leader Aung San Suu Kyi said.

On Wednesday, Myanmar civilian leader Aung San Suu Kyi told the U.N.'s International Court of Justice that the genocide allegations against her country are "incomplete and misleading," and asked that no action be taken by the court.

Myanmar is facing accusations by the African nation of Gambia of committing "genocidal acts" against the Rohingya, a Muslim ethnic minority group, and violating the 1948 Genocide Convention.

Since 2017, thousands of Rohingya Muslims have died and at least 700,000 have fled to neighboring Bangladesh amid persecution and alleged ethnic cleansing. Last year, U.N. investigators said officials involved in the 2017 military crackdown in Myanmar should be charged with genocide, and it called on the U.N. Security Council to refer the case to the International Criminal Court.

Suu Kyi argues that Myanmar's actions are a response to attacks by a Rohingya insurgent group threatening the stability of the country. She says "disproportionate force" may have been used, but that does not prove genocide.

The court is now trying to decide if protective "provisional measures" should be put in place to prevent further violence in the region.