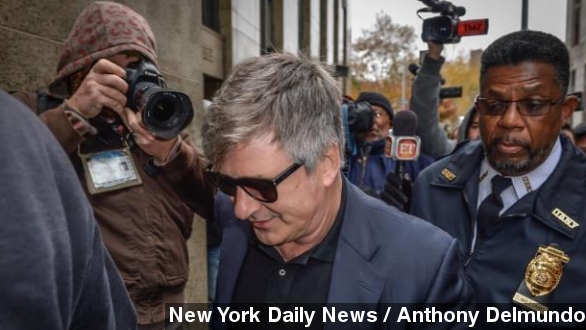 By Elizabeth Hagedorn
November 16, 2013
MSNBC has suspended newly-minted show host Alec Baldwin after his most recent use of an anti-gay slur.
SHOW TRANSCRIPT

He's done it again. Only this time, Alec Baldwin finds himself out of a job — if only temporarily.

MSNBC has yanked his new show off the air for two weeks, following yet another anti-gay slur by the actor. (Via MSNBC)

It all started Thursday after a woman accused of stalking Baldwin was convicted and sent to jail. You'd think he'd be in high spirits after that. Oh, no. (Via ABC )

He called a photographer a certain F-word he claimed was "fathead." Witnesses say otherwise. (Via TMZ)

He then has some choice words for a local TV reporter.

The next day, he apologized, writing in a statement: "I did not intend to hurt or offend anyone with my choice of words, but clearly I have – and for that I am deeply sorry." (Via MSNBC)

But gay rights organization GLAAD wasn't buying it, writing in a statement: "Mr. Baldwin can't lend his support for equality on paper, while degrading gay people in practice." (Via GLAAD)

CNN host Anderson Cooper, who is openly gay himself, had this to say: "Wow, Alec Baldwin shows his true colors yet again." (Via Twitter / @andersoncooper)

But should MSNBC have seen this coming? After all, this isn't the first time the "30 Rock" star has lost his cool.

There was that time he got kicked off a plane for refusing to stop playing a game on his phone. (Via Fox News)

That time a photographer accused him of assault. (Via NBC)

And how could we forget his homophobic Twitter tirade aimed at a British journalist back in June. (Via People)

Throughout all of this, MSNBC has stayed quiet. Given that the network prides itself on being progressive, it's taken some heat from fellow journalists who say it's being just the opposite.

BuzzFeed's Andrew Kaczynski put it this way on Twitter: "Is MSNBC proud to have a host on their channel who so freely mutters anti-gay epithets?" (Via Twitter / @BuzzFeedAndrew)

Daily Dish blogger Andrew Sullivan accused the network of a double standard, writing: "If you're a conservative and are caught yelling these slurs at random people, you'd be fired pronto. ... If you're a self-entitled liberal, you're fine. Even after his bigotry was on full display, MSNBC hired him for a new show as a liberal pundit."

This wasn't the first time MSNBC had to yank its talent off the air. Two years ago, the network suspended Ed Schultz for a week after he called conservative radio host Laura Ingraham a "slut."