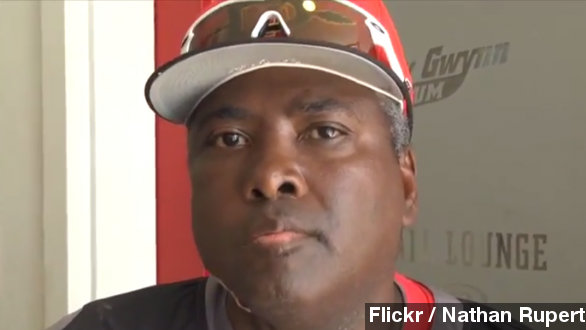 By Danny Matteson
June 16, 2014
One of the greatest hitters in baseball history, Tony Gwynn died Monday after a long battle with cancer.
SHOW TRANSCRIPT

He was one of the greatest hitters in baseball history, a career-long San Diego Padre, and a Hall of Famer. Known as Mr. Padre, Tony Gwynn died Monday after a long battle with cancer. He was 54.

He was also a first ballot Hall of Famer — joining the hall with Cal Ripken Jr. in 2007. Three years prior the lefty’s number 19 had been retired by the Padres. (Via National Baseball Hall of Fame and Museum)

Outside of his impressive statistics and accolades, Gwynn was also known for his good nature and ever-present smile. ESPN’s Tim Kurkjian said this: (Via KSWB)

And Jeff Idelson, President of the National Baseball Hall of Fame and Museum, released a statement reading in part, "Tony will be remembered in baseball circles for his hitting acumen … But it was his infectious laugh, ever-present smile and humble disposition that made Mr. Padre a favorite in San Diego and an endearing figure to a nation of baseball fans.”

Following his retirement in 2001, Gwynn went on to coach baseball at his alma mater, San Diego State University, starting in 2002. (Via Youtube / aztecscom)

That team, the Aztecs, has played in Tony Gwynn Stadium since 1997. (Via KNSD)

As Yahoo notes, Gwynn was diagnosed with a malignant tumor in his cheek in 2010. He then underwent two operations — one in 2010, another in 2012.

The second left the right side of his face partially paralyzed, affecting his ability to smile.

According to The New York Times, before his passing, Gwynn had been on medical leave from coaching since spring of this year. He attributed his cancer to having used chewing tobacco throughout his career.

In a tweet the San Diego Padres wrote, “We are terribly sad to say goodbye to our teammate, our friend and a legend, Tony Gwynn. Rest in peace, Mr. Padre.” (Via Twitter / @padres)

Gwynn's son, Tony Gwynn Jr., an outfielder for the Philadelphia Phillies, also tweeted, "​Today I lost my Dad, my best friend and my mentor. I'm gonna miss u so much pops. I'm gonna do everything in my power to continue to ... Make u proud! ... Make u proud!" ​(Via Twitter / @Tonygwynnjr)