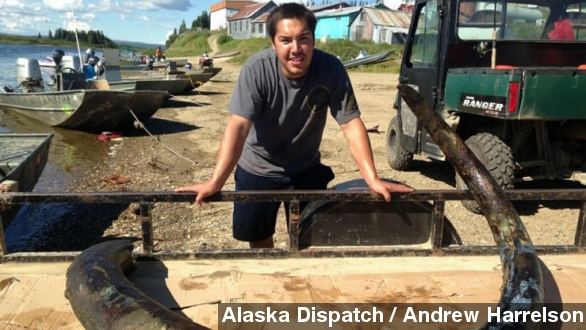 Like mother, like son — an Alaska man uncovered a woolly mammoth tusk 22 years after his mother found one in the very same location.

​According to the Alaska Dispatch, 25-year-old Andrew Harrelson was fishing with his fiancee and his two children near his home village of White Mountain Sunday when he spotted the massive 12-foot-long fossil covered by a stump in the water.

HARRELSON VIA KTUU: "It looked super dark, almost greenish, greenish black, and I knew it wasn't a stick because there was no limbs, no branches coming off.  So, I told myself, 'That's a tusk.'"

And if that discovery itself wasn't cool enough, Harrelson spotted the tusk in the same part of the Fish River just 10 feet from where his mother found a 79-pound tusk back in 1992.

After his own discovery, Harrleson and a relative pried the tusk out of the water later in the day.

They then weighed it on a bathroom scale — according to their unofficial measurements, the fossil was about 162 pounds.

And it turns out, Harrelson's big find could be worth some big money. Woolly mammoth tusks can sell for thousands of dollars, as you can see from this listing on Fossil Realm.

The reason behind that mammoth price tag? Woolly mammoth tusks are collected for their pure, high-grade ivory, much like elephant tusks.

And because most woolly mammoths died off about 12,000 years ago, their tusks are all the more valuable and rare.

Early humans used tusks for tools and making art, but today, they're often used in knife handles and jewelry like the pieces sold by this store.

Harrelson says prospective buyers have been making him offers for his newfound tusk. His father says he's sure his son will use any money he gets toward a down payment on a house.

​This video contains images from Quinn Dombrowski / CC BY SA 2.0 and Rob Pongsajapan / CC BY 2.0.