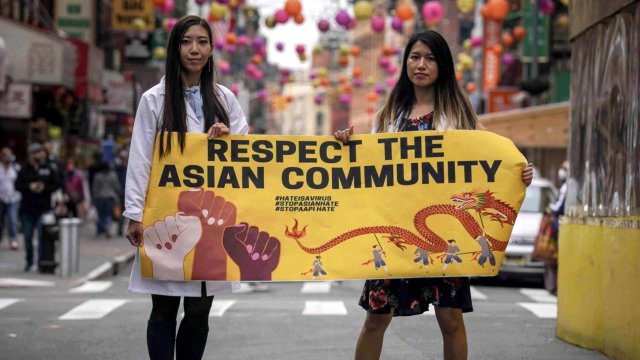 Asian American and Pacific Islander Heritage Month celebrates the contributions and cultures of Asian Americans throughout the U.S.

For activists, it's also a time to combat stereotypes and racism and call for greater representation in education and the media.

“What do other Americans know about our communities?" asked Russell M. Jeung, co-founder of Stop AAPI Hate. "What stereotypes do they hold, and how do these stereotypes and perceptions contribute to the racism we’re experiencing?"

Jeung, a professor at San Francisco State University, served on the academic advisory committee for the second annual STAATUS Index survey, which tracks the perceptions and stereotypes of Asian Americans in the U.S.

The report found that an increasing percentage of Americans see Asian Americans as “perpetual foreigners," and when asked, 58% of respondents could not name a single prominent Asian American figure.

“The fact that the majority of Americans couldn’t name another prominent Asian American was troubling, especially when our vice president is Asian American," Jeung said. "It just speaks to the need to educate the broader community to further raise awareness to help us recognize that Asians belong to the United States."

Of the respondents who could name an Asian person, most said Jackie Chan, who is not American, and Bruce Lee, who died in 1973.

Jeung says this lack of awareness and “invisibility” of prominent Asian American figures is largely because Asian American narratives and histories aren’t taught enough at school or represented enough in entertainment or news media.

Another recent report from the Asian American Journalists Association found that the on-air staff of more than 70% of major local TV stations did not represent the AAPI population in their communities.

“The images and the representations that they receive in the news and then media and in Hollywood really do have a significant impact on how they perceive Asians and Pacific Islanders," Jeung said. "So, for me, the media could really help by providing more well-rounded representations and more in-depth stories of the experiences of Asians in the U.S.”

Activist organizations like Stop AAPI Hate are advocating for the representation of Asian American history, culture and inclusion in schools. The group is hosting a summit next month to build on its movement.