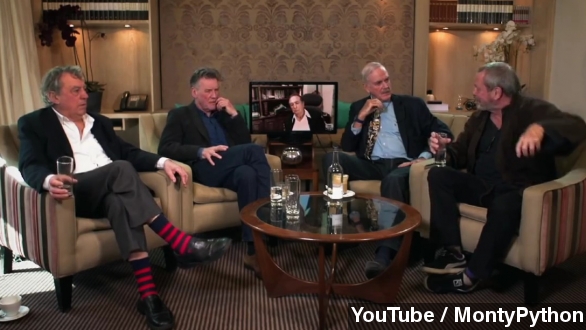 By Briana Koeneman
November 19, 2013
Their parrot might be still be dead, but Monty Python is hoping to rise from the dead for a reunion.
SHOW TRANSCRIPT

Their parrot might be still be dead, but Monty Python is hoping to rise from the dead.

The surviving members of the legendary UK comedy group are reuniting for a new project nearly 30 years after the last time they worked together. (Via YouTube / MontyPython)

But according to The Sun, the group recently realized "it was now or never," and decided to get the act back on the road for "a fully-fledged reunion."

And the funny guys have been dropping hints ever since. Idle tweeted directly about the press conference Tuesday morning. (Via Twitter / @EricIdle)

And a few hours later, Jones told the BBC, "We're getting together and putting on a show – it's real. I'm quite excited about it."

They also made several movies, including "Monty Python and the Holy Grail" and "Life of Brian." (Via Sky News)

No word on exactly what the new project entails, but some reports point to a live show with a movie or TV show to follow.