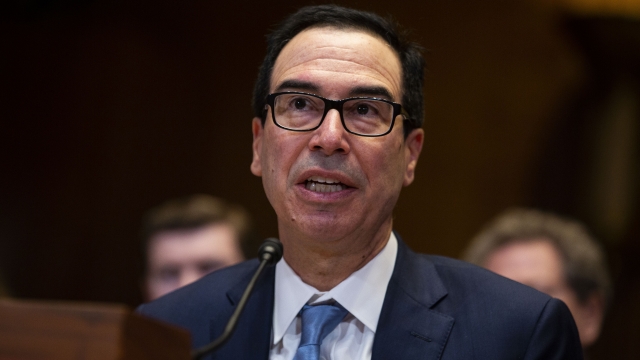 SMS
Mnuchin Rejects Subpoena Request For President Trump's Tax Returns
By Ahmed Jawadi
By Ahmed Jawadi
May 17, 2019
The Treasury secretary reiterated his stance that the department was "not authorized to disclose the requested returns and information."
SHOW TRANSCRIPT

Last week, House Ways and Means Committee Chairman Richard Neal sent subpoenas to both Mnuchin and IRS Commissioner Charles Rettig for President Trump's personal and business tax returns from the last six years. The subpoenas were issued after more than a month of back-and-forth between the committee and Treasury Department, with Mnuchin ultimately denying the committee's request on the grounds that it "lacks a legitimate legislative purpose."

In his letter to Rep. Neal on Friday, Mnuchin reiterated his stance that the Treasury Department was "not authorized to disclose the requested returns and return information." He did offer to provide it with information on the process of "how the IRS audits and enforces the federal tax laws against a president."

Neal said in a press release Friday that "the law, by its terms, does not allow for discretion as to whether to comply with a request for tax returns and return information. Given the Treasury Secretary’s failure to comply today, I am consulting with counsel on how best to enforce the subpoenas moving forward."

Prior to Mnuchin's announcement, Neal told CNN that he'd prefer not to hold Mnuchin and Rettig in contempt of Congress and instead leave it to the federal courts to decide whether to enforce his subpoena.