Missouri Is Left With Only 1 Abortion Clinic 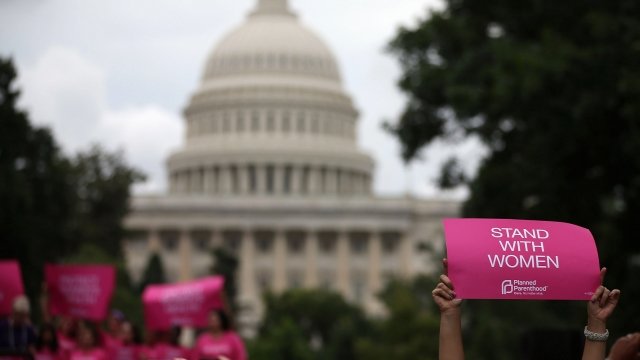 SMS
Missouri Is Left With Only 1 Abortion Clinic

By Andrea Gonzales
October 4, 2018
A Planned Parenthood in central Missouri can no longer perform abortion services after the facility failed to meet new requirements.
SHOW TRANSCRIPT

Missouri is left with only one abortion clinic after a centrally located Planned Parenthood failed to meet new state requirements imposed Monday. The facility's license expired Tuesday. Women who are seeking abortions in Missouri must now travel to St. Louis or a neighboring state.

Last month, a federal appeals court ruled Missouri can enforce that doctors must have admitting privileges at nearby hospitals before they can perform abortions. On Monday, the court issued a mandate saying this rule can now take effect. The Associated Press reports this specific facility in Columbia has had trouble finding a medical professional with admitting privileges since the a panel at University of Missouri Health Care voted to stop offering these services in 2015 amid a Republican-led legislative investigation on abortions in the state.

A Planned Parenthood spokesperson said because of the mandate, the clinic had to cancel scheduled abortions. The clinic is still able to provide other health care services.

The Guardian reports Planned Parenthood attorneys asked a U.S. District Judge to grant a temporary restraining order. If he rules in their favor, abortions could resume at the clinic.

This all takes place as the Senate decides whether to approve Brett Kavanaugh's Supreme Court nomination. Some SCOTUS experts have predicted even a conservative majority Supreme Court might not overturn Roe v. Wade outright. They predict the court would be more likely to uphold state laws like the Missouri case restricting access to abortions. For what it's worth, Kavanaugh said during his confirmation hearing he considered Roe v. Wade "an important precedent of the Supreme Court that has been reaffirmed many times."

Business Insider reports the number of abortion clinics in the U.S. has shrunk as abortion rates have dropped. At least five states have only one clinic.