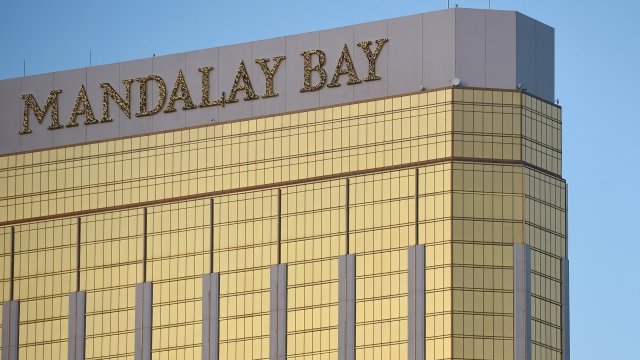 By Katie Cammarata
September 13, 2018
The Las Vegas shooting victims' lawyers would have until Sept. 14 to accept the legal notices.
SHOW TRANSCRIPT

MGM Resorts International — the company that's suing more than 1,900 victims of the 2017 mass shooting in Las Vegas — is trying to make a deal.

The company sent a letter to the victims' lawyers on Tuesday. In it, MGM Resorts said it would donate $500 to charity for each defendant who agrees to waive being served and authorizes their attorney to accept the lawsuit instead.

In July, MGM Resorts filed complaints in Nevada and California, claiming the Las Vegas Mandalay Bay Resort and Casino and its owners can't be held liable for the Oct. 1 shooting that left 58 people dead.

Serving a lawsuit is a stepping stone to getting MGM Resorts' suit to federal court. And the company says it would rather spend its money on donations than on paying people to serve the suits.

But a lawyer from a group representing most of the shooting victims told NBC News the offer was "nonsense" and said it's a way for the company to save money.

A spokeswoman for MGM told NPR victims' lawyers have until Sept. 14 to accept the legal notices.