Mexico To Deport Migrants Who Tried To Illegally Cross US Border 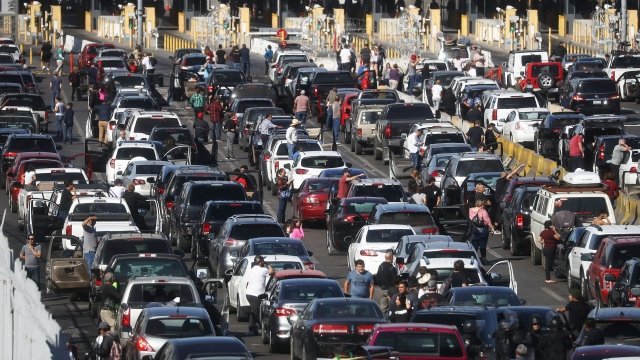 Mexico plans to deport as many as almost 500 Central American migrants who attempted to illegally cross its border with the U.S. Sunday.

CNN reported the migrants were part of what was supposed to be a peaceful protest in Tijuana, Mexico.

But some demonstrators split off from the group and tried to illegally cross into the U.S. by rushing through the San Ysidro port of entry or climbing the fence on either side of it.

U.S. Customs and Border Protection said some of its officers fired tear gas after some migrants threw projectiles at them. It also responded by temporarily suspending operations at the port of entry.

Mexico's Interior Ministry said authorities are working to identify the migrants who attempted to cross the border "in a violent way." Those that are identified as participating will be "immediately" deported.

The migrants are part of a much larger group numbering in the thousands who've reached Tijuana, which is across the border from San Diego, California.

They're waiting for the chance to apply for asylum in the U.S. But as Newsy previously reported, that process could take months since U.S. border officials are only processing a limited number of claims each day.