Meteorite That Hit Nicaragua Might Have Broken Off 2014 RC 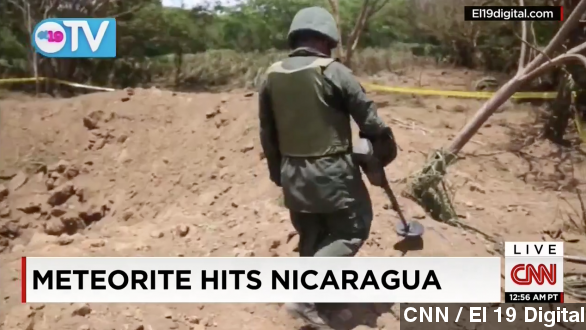 SMS
Meteorite That Hit Nicaragua Might Have Broken Off 2014 RC

By Cliff Judy
September 8, 2014
Officials in Nicaragua say they're still trying to figure out whether the space rock disintegrated on impact or if remnants are still in the soil.
SHOW TRANSCRIPT

Nicaraguan officials say they feel lucky no one was hurt from the possible meteorite that touched down over the weekend.

ROSEMARY CHURCH, CNN ANCHOR: "Officials believe it was either an ice or rock meteorite."

JOHN VAUSE, CNN ANCHOR: "The impact of whatever it may have been left behind a crater — even registered on the seismic instruments, which register earthquakes."

While officials tried to figure out if there was anything left of the meteorite Sunday, they did announce it left a crater about 40 feet wide by five feet deep. El 19 Digital estimated it struck the Earth around 670 miles per hour.

The impact also inspired speculation from Nicaraguan officials that it broke off a much larger piece of space rock.

Over Labor Day weekend, NASA says it detected a 60-foot-long asteroid named 2014 RC. The NEO — or Near-Earth Object — grabbed headlines because of its relatively close pass by Earth, though NASA cautioned its shortest proximity to us Sunday would still be 25,000 miles away.

Managua is a densely populated city, and officials stressed they "thank[ed] God" the suspected meteorite hit where it did — only a few hundred meters from a hotel. (Video via YouTube / Central America Vacations)