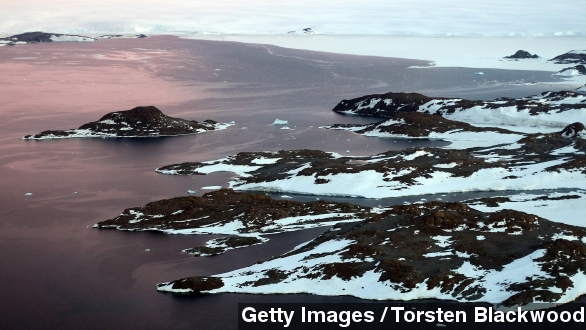 By Sebastian Martinez
September 1, 2014
A study of almost 20 years' worth of satellite images shows Antarctic sea levels are on the rise as ice shelves continue to melt.
SHOW TRANSCRIPT

A study more than 20 years in the making reports a rapid rise in Antarctic sea levels. The cause? Melting ice shelves.

That's an especially big deal for a continent covered in ice, and the scientists say the fact the glacial melt produces fresh water is significant. (Video via Discovery)

The study was published in the journal Nature and reports, "​On the basis of the model simulations, we conclude that this sea-level rise is almost entirely related to steric adjustment," or chemical changes, "rather than changes in local ocean mass."

Basically, because fresh water is less dense than salt water, when it pours into the ocean surrounding Antarctica, it produces a dramatic rise in the sea levels around the continent. The melting freshwater ice shelves are raising sea levels.

The study also discounted other possible explanations for the rising sea levels like wind pushing water against the ice shelves, as lead scientist Dr. Craig Rye told the BBC.

"We can estimate the amount of water that wind is pushing on to the continental shelf, and show with some certainty that it is very unlikely that this wind forcing is causing the sea level rise."

As Deutsche Welle reports, another unrelated study on Antarctic ice published in mid-August forecasted Antarctic ice melt will soon become a big threat. A researcher told the outlet, "Ice loss in the Antarctic could become the biggest contributor much earlier than expected, raising global sea level further by up to [about 15 inches] by the end of this century."

And just a few months before that researchers found a separate cause of the increasing melt — wind currents pushing warm water underneath the ice.

It didn't take long for at least one outlet to see the consequences, as Bloomberg highlighted the risk the rising water poses to megacities such as New York and Shanghai.

The lead scientist on this latest study also told the BBC the next target for research is why, throughout all of this, sea ice around the Antarctic appears to be increasing.