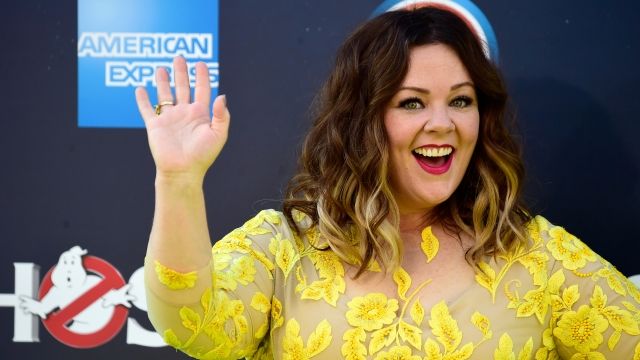 By Lindsey Pulse
May 12, 2017
The sketch appears to be filmed outside CNN, which the Trump administration has repeatedly called "fake news."
SHOW TRANSCRIPT

Sean Spicer is riding around the streets of Manhattan on a podium. Well, his doppelgänger is.

Melissa McCarthy has taken her impression of the White House press secretary outdoors, and the internet is living for it. Twitter users started sharing videos and photos of the actress on a motorized podium early Friday morning.

Here's every angle we could find of @melissamccarthy's performance as Sean Spicer in the streets of Manhattan this morning #SNL @seanspicer pic.twitter.com/6JPO7NcoXq

You already know it's going to be a good week for #SNL when Melissa McCarthy is spotted on 58th st with the Sean Spicer podiumobile! @nbcsnl pic.twitter.com/pTygiSZUmO

From the looks of it, McCarthy is filming, or rehearsing, an upcoming Spicey sketch for "Saturday Night Live." The bit was filmed outside CNN's offices.

Which could be intentional. After all, the Trump administration has deemed the outlet "fake news." President Donald Trump has repeatedly taken aim at CNN's White House correspondent Jim Acosta.

This week's episode of "SNL" is kind of a special one — it's one of a handful shows this season that will be broadcast live coast to coast. NBC announced in March that it would air the last four shows live across the country.