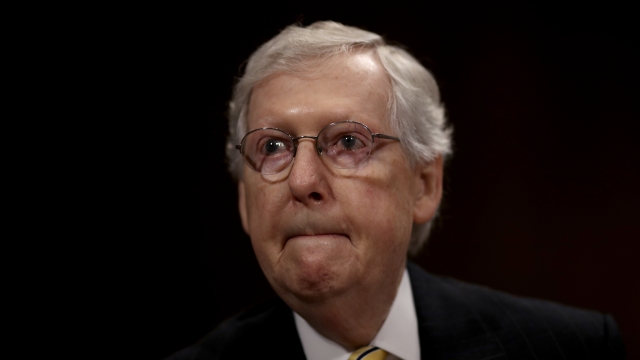 SMS
Mitch McConnell Defends The Senate Filibuster In Op-Ed
By Alec Larson
By Alec Larson
August 22, 2019
​The filibuster lets the minority party delay or even block consideration of a bill unless 60 senators agree to move it to a vote.
SHOW TRANSCRIPT

Senate Majority Leader Mitch McConnell has written an op-ed defending the Senate filibuster in response to calls from some Democratic lawmakers to abolish it.

McConnell wrote in The New York Times, "The legislative filibuster is directly downstream from our founding tradition. ... If future Democrats shortsightedly decide to reduce the Senate to majority rule, we'll have lost a key safeguard of American government. ... They'd regret it a lot sooner than they think."

The legislative filibuster lets the minority party delay or even block consideration of a bill unless 60 senators agree to move it to a final vote.

McConnell warned that abolishing it could have consequences similar to the 2013 decision by Democrats to ban the filibuster in debate over certain presidential nominations. That precedent let Republicans ban the filibuster during deliberations over Supreme Court nominees in 2017 — something Democrats criticized during the nomination processes for Neil Gorsuch and Brett Kavanaugh.

McConnell's op-ed ran just 10 days after an another one written by former Senate Majority Leader Harry Reid. Reid called for banning the filibuster, writing: "In bygone eras, the filibuster was a symbol of the Senate's famed role as the cooling saucer for legislation and ideas from the more hot-tempered House of Representatives. ... Sadly, we are not living in the same legislative world anymore."

Several Democratic presidential candidates have also called for the end of the Senate filibuster, including Sen. Elizabeth Warren. She tweeted in April, "When Democrats have the White House again, if Mitch McConnell continues to put small-minded partisanship ahead of solving the massive problems facing our country, then we should get rid of the filibuster."