Madonna, Macklemore And Ryan Lewis Will Perform At Grammys 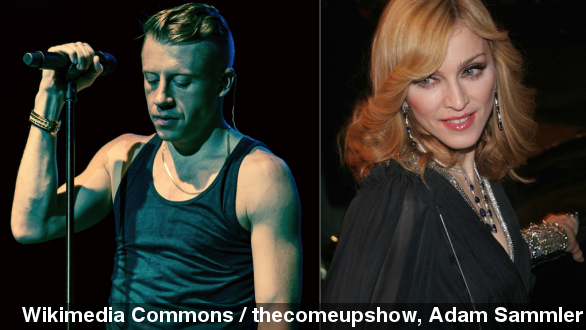 ​Looks like Madonna and Macklemore & Ryan Lewis will hit the stage together at the Grammy Awards Sunday.

Sources tell Us Weekly they'll perform Macklemore's "Same Love," which is nominated for Song of the Year.

The 2013 hit talks about support for gay rights — and won MTV's VMA for Best Video with a Message. (Via YouTube / Ryan Lewis)

Details about the rumored performance have not been revealed, but the material girl hinted about the act on social media last week — saying "My lips are almost sealed! I can’t say anything more … #itsasecret." (Via Facebook / Madonna)

Madonna's last Grammy performance was in 2006 with Gorillaz singing a mashup of "Feel Good Inc." and "Hung Up."

This will be the first Grammy performance for Macklemore & Ryan Lewis who gained prominence in 2013 after the release of their album "The Heist." (Via TBS / "Conan")