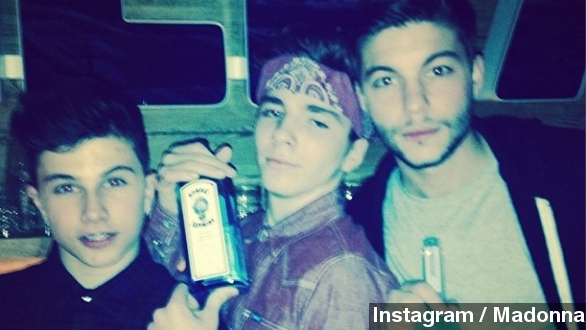 Like a virgin...drinking for the very first time? Madonna is getting backlash after posting a photo that seems to feature her 13-year-old son...drinking.

The 55-year-old mother of four posted this photo of her son, Rocco, "The party has just begun! Bring it! 2014." See that thing young Rocco is holding? Yeah, seems to be a bottle of gin. (Via Instagram)

Soon, the photo ignited more than 1,200 comments, many of which maybe had Madonna wishing Papa would stop preaching. One user said "It is poor judgment to glorify substances to children." (Via E!)

Madge posted a follow-up photo a few days later to explain: "No one was drinking we were just having fun! Calm down and get a sense of humor! Don't start the year off with judgement!" (Via Instagram)

Here comes the uh-oh. Rocco posted this image to his own Instagram account a couple of days before his mother's photos, in which he appears to be holding a glass of champagne. (Via Instagram)

In a piece called "Madonna's Shocking Instagram Scandal," a blogger for Vanity Fair wrote: "I, for one, am shocked that Madonna ... has such loose morals when it comes to underage consumption of alcohol. I’d expect this from the likes of Amy Grant, but Madonna??" (Via Vanity Fair)

Of course, it doesn't stop at the blogs. Programs like The View and CNN are getting in on the action, too.

"Because Madonna is known for being a very strict parent."

"Listen, Madonna is a lot of things, but I don't think people have ever said she's a bad mother." (Via CNN)