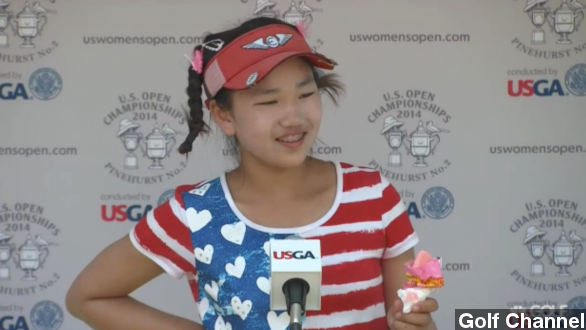 By Christian Bryant
June 19, 2014
Lucy Li became the youngest golfer to qualify for the U.S. Women's Open, teeing off at Pinehurst Thursday and eating ice cream during an interview.
SHOW TRANSCRIPT

While most eyes have probably been trained on Brazil for the World Cup, history was made in Pinehurst, N.C. Thursday as 11-year-old Lucy Li became the youngest person to qualify for the U.S. Women's Open.

And the only person — at least in recent history — to eat ice cream during a post-first round interview.

Reporter: "How's that Starburst ice cream, by the way?"

Yup, decked out in red, white, and blue, Li stood on top of a box while fielding questions from reporters and showing a bit of personality. (Via Twitter / @WillGraySC)

Reporter: "You sat down a lot on some of the tees."

Li: "Yeah, I usually sit down more than that." (Via Golf Channel)

Of course, when you're a sixth grader and competing with grown women, people are going to ask, Is she too young?, which is exactly what No. 1-ranked Stacy Lewis did.

Speaking to USA Today about Li before the tournament, Lewis said, "I'm not a big fan of it. ... If it was my kid, I wouldn't let her play in the U.S. Open qualifier at 11, but that's just me."

The jury's still out on whether Li was trolling Lewis with the ice cream interview or just being an 11-year-old kid. (Via WFMY)

As for the first round itself, Li got off to a rough start Thursday, with a double-bogey on the opening hole.

But she finished at eight over par, or 78, which drew mixed reactions. A PGA writer called it "fantastic" while Los Angeles Times described it as "less-than-stellar."

But Li did finish ahead of Natalie Gulbis, a former LPGA winner, in the first round. And while golf analysts are keeping tabs on Li's every move, Li's purpose is a bit simpler than making history. She says she's just there to have some fun.