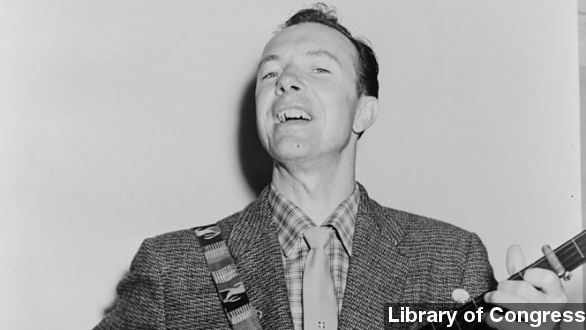 Pete Seeger traveled all around the country for decades strumming his 12-string-guitar or banjo and, more importantly, inspiring people. Monday, Seeger passed away at the age of 94.

Seeger was a legendary folk singer and song-writer known for his interpretation of "This Land is Your Land" and "We Shall Overcome," as well his songs he wrote such as "Where Have All the Flowers Gone." (Via Fox News)

But it was Seeger's social activism that separated him from the rest, his causes included everything from labor rights to the anti-war and civil rights movements. (Via MSNBC)

USA Today quotes Seeger in his biography. "Songs won't save the planet, But, then, neither will books or speeches...Songs are sneaky things. They can slip across borders. Proliferate in prisons. ... Rulers should be careful about what songs are allowed to be sung."

Seeger is the only member of the Rock and Roll of Fame who was convicted of contempt of Congress. Back in 1955, Seeger refused to testify about his past membership in the communist party, though his conviction was overturned in 1961.

In 2009, Seeger's 90th birthday was commemorated in Madison Square Garden with a guest list of legends including Bruce Springsteen, Dave Matthews and Emmylou Harris. (Via CNN)

"... he sings all the verses all the time, especially the ones we like to leave out. ... he remains a stealth dagger about through the heart of the country's illusions about itself." (Vis PBS)

From marching with Dr. Martin Luther King Jr. to cleaning out the Hudson River, the Father of American Folk Music lived and breathed and, more importantly, sang for the causes he championed. (Via YouTube / Preston Randolph)

The New York Times quotes Seeger as saying, "My job, is to show folks there’s a lot of good music in this world, and if used right, it may help to save the planet."