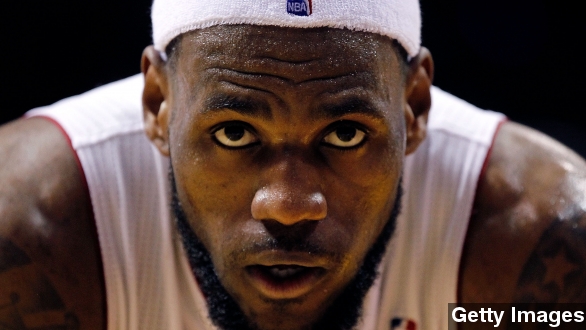 By Danny Matteson
July 11, 2014
‘The Decision 2.0’ is bringing LeBron back home, but it could send some other stars like Carmelo Anthony, Kevin Love, and Chris Bosh packing.
SHOW TRANSCRIPT

“This fall I’m taking my talents to South Beach and join the Miami Heat.” (Via ESPN)

At the time the decision wreaked havoc on NBA free agency — with multiple superstars jumping teams — and LeBron, Dwyane Wade, and Chris Bosh forming the big three in Miami. (Via NBA, The Miami Herald)

Now, ‘The Decision 2.0’ is bringing LeBron back home, but it could send some other stars — like Carmelo Anthony, Kevin Love, and Chris Bosh packing. So what happens next?

Well, first off, James’ former teammate Chris Bosh might have already made a decision.

As of Friday evening Yahoo was citing sources saying Bosh was staying in Miami and collecting a $118 million paycheck over the next five years.

That after other rumors, like this one from SB Nation, had Bosh “likely” going to the Rockets to join James Harden and Dwight Howard for four years and $88 million.

Then there’s another star who might be taking his talents to Northeast Ohio. As CBS Sports notes, many execs around the league think a deal involving this year’s number one pick Andrew Wiggins, could be in the works to bring Kevin Love from Minnesota to Cleveland.

According to ESPN’s Marc Stein it’s a deal Kevin Love is reportedly “intrigued” by, though Yahoo’s Marc Spears writes on Twitter that Wiggins’ camp doesn’t foresee him heading north.

And finally there’s the player drafted two spots after LeBron in the 2003 NBA draft — Carmelo Anthony.

Rumors over the last few days had him returning to the Knicks with a decision due on Thursday. (Via New York Daily News, Los Angeles Times)

That never came, and as USA Today reports the Chicago Bulls and Los Angeles Lakers might still be in the running.

Oh, and there is that team in South Beach with a superstar sized hole in it. (Via Getty Images)