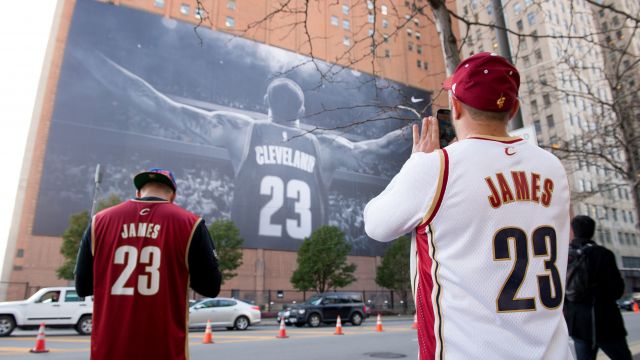 The iconic LeBron James banner in Cleveland won't be getting trumped for the Republican National Convention.

The banner currently hangs from Sherwin-Williams Co.'s global headquarters. It was set to be temporarily replaced with a red, white and blue welcome sign during the RNC, happening in the city next month.

But after nearly 25,000 people signed an online Change.org petition, it appears the 10-story Nike banner is going to stay.

Sherwin-Williams said in a statement: "In recognition of fan interest, the company will keep the now-famous LeBron James banner hanging from its global headquarters building. ... We want the energy and excitement in this city to continue."

The company is actually going further than just keeping the banner up. The company announced it will donate $150,000 to the LeBron James Family Foundation, too.

The banner is located just outside Quicken Loans Arena, where the Cavaliers play.

It first appeared at the location in 2005 during James' first stint with the Cavs. It was removed when he took his talents to Miami, but then another one was put up when he returned home in 2014.

And now that James has delivered on his promise of bringing the city its first major sports championship in 52 years, it's tough to take the piece of Cleveland history down without more than a few complaints.

This video includes clips from the Republican National Convention and WEWS, and images from Getty Images.