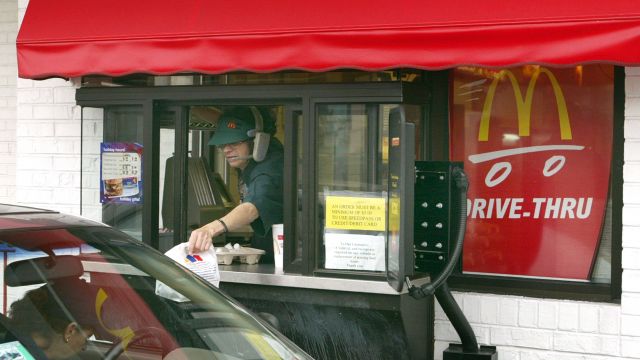 By Matt Picht
May 31, 2016
The company's "vehicles only" drive-thru policy is discriminatory against those with disabilities, according to a new lawsuit.
SHOW TRANSCRIPT

If you want to get served at the McDonald's drive-thru, you need to show up in a car. For late-night partiers, that's an inconvenience. For Louisiana man Scott Magee, it's a discrimination lawsuit in the making.

Magee is legally blind and can't operate a vehicle, which means he needs a ride if he wants a late-night snack from McDonald's. He says he's tried walking through the drive-thru multiple times but has been turned away.

Now, Magee's filed suit against the company in Chicago's U.S. District Court, accusing them of violating the Americans with Disabilities Act by denying him services offered to sighted customers.

The Chicago Tribune spoke with Magee's lawyer who said the burger chain has several options for making its drive-thrus more accessible to the blind. He pitched the idea of installing a phone outside the restaurant, which blind customers could use to call in orders and have them brought out by the staff.

Magee is asking the court to compel McDonald's to provide an accessible option for its drive-thru services. He's also seeking compensation for court costs and damages and to make this a class-action case.

McDonald's faced a similar lawsuit last year after a New York man alleged the company's increasing use of Coke Freestyle soda fountains made its soft drinks inaccessible to blind people.

A McDonald's spokeswoman told WMAQ last week the company hadn't yet received the lawsuit but didn't comment on pending litigation as a general practice.

This video includes images from Getty Images and clips from McDonald's.