Two Of The Biggest NBA Teams Just (Sorta) Broke Up 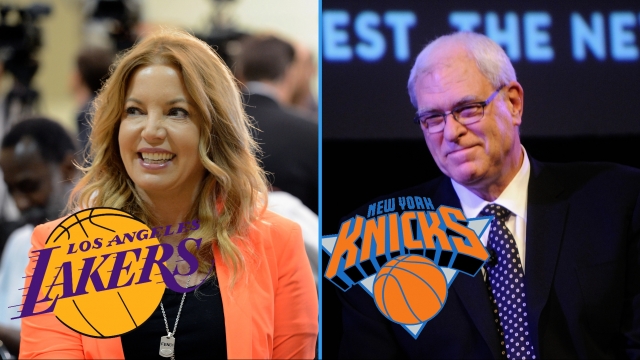 Two of the biggest teams in the NBA just broke up. Kind of.

It all has to do with this now-former couple: Phil Jackson and Jeanie Buss.

Before announcing their separation Tuesday, the two had been dating since 1999 and engaged since 2012.

Which Tradition Is Better: NFL On Thanksgiving Or NBA On Christmas?

During the majority of that time, Jackson coached the Lakers. But his relationship with Buss became a much bigger deal for the NBA when Jackson took an executive role with the Knicks in 2014.

It was such a big deal the NBA released a statement regarding the two, saying it had put restrictions in place to avoid any possible conflicts of interest.

"We have addressed the issue with the Knicks and Lakers to ensure that the relationship between Jeanie Buss and Phil Jackson will not affect how the teams operate," NBA spokesman Mike Bass said in 2014.

At the time, Buss said she "didn't anticipate any problem" since she's only involved in the business side of the Lakers — not any basketball operations.

The last few years have been riddled with rumors that Jackson was interested in opting out of his Knicks contract and returning to the Lakers.

But he denied those rumors. Perhaps they'll stop being floated about now that Jackson and Buss are no longer dating.