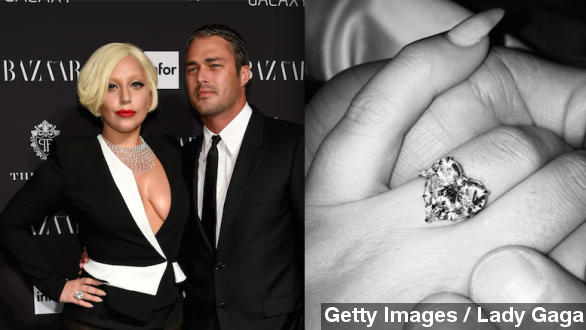 By Lauren Zima
February 16, 2015
Surprisingly, the singer got engaged in the most stereotypical way possible: on Valentine's Day.
SHOW TRANSCRIPT

Did not see this coming from the woman who wore a meat dress.

Of all people, Lady Gaga got engaged on ... Valentine's Day. And got proposed to with ... a heart-shaped diamond ring. She didn't announce the happy, if seemingly pedestrian, news until Monday.

The two have been together since meeting on the set of her 2011 music video for "You and I." But while Gaga might present a bizarre persona as a singer, and that video was certainly quite an introduction, she's often said her relationship with Kinney is pretty normal, even borderline stereotypically traditional.

In March 2014, she said Kinney was "totally in charge" at home, adding, "It's not good for relationships to tell men what to do." Though she also told Ellen DeGeneres in 2013:

And also that year said the two were "gypsies" who had met "in the desert somewhere" and fallen in love. And that the key to their relationship was trust.

Then in October 2014, she said that Kinney was completely supportive of her and saw past her crazy clothes to the "Italian-American girl" she really is.

So, a really intense combination of normalcy and weirdness, heart-shaped diamonds and desert meetings. Can't wait to see what this wedding looks like.