Kings-Rangers Stanley Cup Is More Than Just A Game 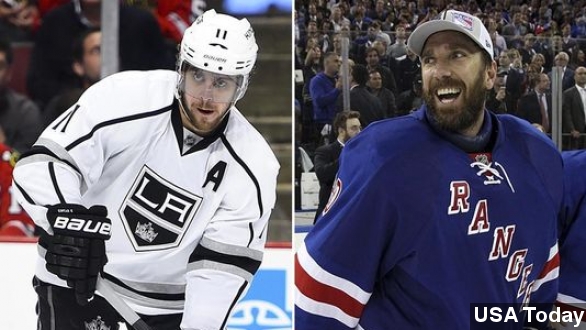 SMS
Kings-Rangers Stanley Cup Is More Than Just A Game

NYC versus LA — the first and second most populated cities in the U.S. and sites of the 2014 Stanley Cup.

And, not surprisingly, some of the most expensive cities in the U.S., with both making Forbes' top 20 list of most overpriced cities.

As you can imagine, with big cities, big money, big names and a big trophy on the line, more than just the game is getting big attention.

First, the money. SB Nation points out it's actually cheaper for Rangers fans to buy tickets to the game in LA, fly there and book a four-star hotel than it is to get seats in their own city. All that costs, by SB Nation's estimate, $2,083. Two tickets for a game in Madison Square Garden? $2,174 — a difference of $91.

And you can't talk about NYC and LA without mentioning Hollywood. According to the New York Daily News, Robert De Niro, Michael Strahan, Jimmy Fallon and Liam Neeson are all rooting for the blue men. (Via NBC | CBS | ABC | BBC)

While Will Ferrell, Jason Bateman, Kobe Bryant and Alyssa Milano are all donning the black and silver. (Via Dodge |  HitFix | Fox Sports | CNN)

But let's not get ahead of ourselves, here. Just because these are two high-profile cities and teams doesn't mean it's going to translate into a much-watched series.

The New York Times writes: "Some wonder if this is the formula for record viewership. It is not. Or more correctly, we do not know for certain. The hypothesis has not been tested often enough with the right teams in the markets. ... The network makes more money the longer a series goes, and, by the way, it's more exciting if it's not a sweep."

Last year's Chicago-Boston Stanley Cup finals brought in an average 5.7 million viewers with 8.16 million tuning in for the Game 6 clincher, according to NBC's estimates. NBC will once again carry this year's finals, which start Wednesday night.