Kilauea Volcano's 35-Year Eruption Streak May Be Over 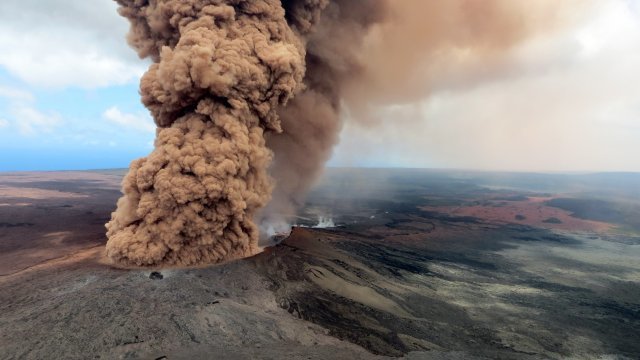 SMS
Kilauea Volcano's 35-Year Eruption Streak May Be Over

The Kilauea volcano in Hawaii has been erupting almost continuously for the last 35 years. But that streak may be coming to an end.

A lead scientist with the U.S. Geological Survey's Hawaiian Volcano Observatory told CNN in an exclusive interview that the volcano hasn't produced lava in three months. It had one of its bigger eruptions in May of this year, forcing evacuations and covering 14 miles of the Big Island in lava.

The USGS scientist told CNN the recent pause could be caused by a number of things, including a lack of magma from this year's eruption or, simply, that there just isn't enough pressure to push what magma there is to the surface.

This pause may mark the end of Kilauea's current erupting activity. That just means that when it does erupt again, it will mark a new eruptive event. And scientists don't know how, when or where exactly it could happen.

In a post on the USGS website, one scientist listed the many things a new eruptive event could bring — explosive eruptions, a new lava lake or even a decreased supply of magma so the "quiet" continues for years.

But nothing is certain, and the Kilauea volcano could just continue eruptions like the one earlier this year.

In its 2018 National Volcanic Threat Assessment, USGS listed Kilauea as the most threatening volcano in the United States.