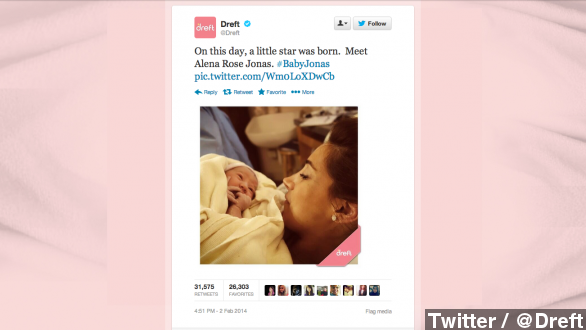 One of the Jonas Brothers is now a father. Kevin Jonas and wife Dani welcomed a baby girl to the world Sunday, but they weren't the ones to do the big reveal.

​This would seem to just further prove in the social media world, there's always an opportunity to cross promote. Dreft documented the "Married To Jonas" stars' pregnancy in a series of online videos. (Via YouTube / Dreft Detergent)

Kevin apparently just couldn't wait to be a new dad. He tweeted at least once wondering if Dani was in labor the last couple of weeks.

But he uploaded a picture to Instagram Sunday morning of a hospital monitor confirming he was about to become a dad.

In a statement to E!, the new parents called themselves overjoyed. "She is precious! We could not be more excited to start building our family together."

In a tweet late Sunday night, the eldest Jonas Brother wrote, "I'm so in love with her." (Via Twitter / @kevinjonas)

That's a start, Dad. There's no confirmation yet from E! on whether its reality series "Married To Jonas" will come back for a third season, but a new little one will keep the couple busy regardless. (Via E!)