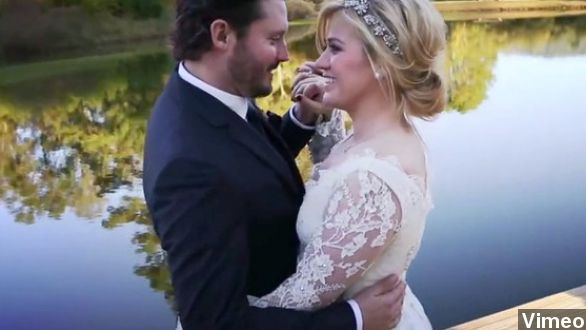 By Candice Aviles
November 19, 2013
The 'Wrapped in Red' singer broke the news via Twitter, calling it the best Christmas present ever.
SHOW TRANSCRIPT

The "Wrapped in Red" singer broke the news via Twitter writing, “I’m pregnant!!! Brandon and I are so excited! Best early Christmas present ever” (Via Twitter / @kelly_clarkson)

The news comes just a week after Clarkson dodged a head-on “are you pregnant?” question from Jay Leno on The Tonight Show. He asked and she said she wasn’t ready to make any announcements. (Via Sony Music Entertainment / “Stronger” )

Leno: “Have you been trying?”

Leno: “Like rabbits. So you want to have a rabbit.”

Clarkson: “A little bunny. No, I want a little baby with little feet and I just want to bite them.” ​(Via NBC)

The singer went on to say despite not wanting kids before, she now wants five.

Thirty-one-year-old Clarkson tied the knot with Brandon Blackstock in a small wedding on Oct. 20. He already has two children from a previous marriage, who are 7 and 11 years old. (Via Weiss Eubanks Films )

Clarkson has made it well-known she wouldn't drag her feet on the babymaking. Ten days after her wedding she said in a radio interview what she wanted for Christmas — to be pregnant. (Via E!)

And when it comes to work, the singer said, "My record label is freaking out because all I can talk about now are babies. We're really excited and want to get our family started." (Via Us Weekly)

A big congratulations to Clarkson! Her Christmas special airs on Dec. 11 on NBC.