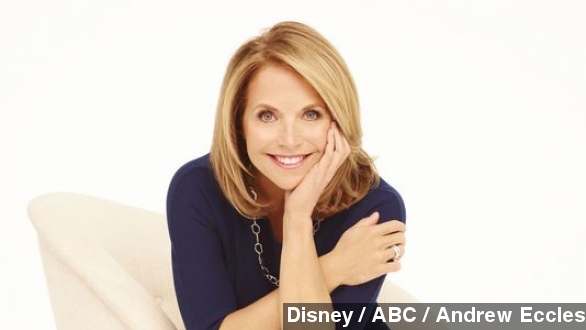 Less than three years after starting her highly-publicized stint at ABC, Katie Couric is said to be leaving the network for a tech giant.

According to The Hollywood Reporter, the daytime talk show host and ABC correspondent is negotiating an exit package to jump aboard Yahoo! Couric's role has yet to be disclosed, but AllThingsD reported back in August Yahoo CEO Marissa Mayer had been wooing the TV vet for a Web interview show.

Since being appointed CEO in July 2012, Mayer has been working to enhance the company's media presence. (Via World Economic Forum)

Former New York Times employees David Pogue and Megan Liberman both defected from the paper for spots at Yahoo!

Couric might be officially leaving her correspondent's post at ABC but she won't exactly be going far.

And according to TV Newser, the partnership seems to be working out well for both companies. "October marked the 21st straight month that for the Yahoo-ABC News Network as the No. 1 news site. The sites had 82 million unique visitors, a +16% advantage over No. 2 CNN with 70 million."

But a writer for Variety casts doubt that Couric will be able to bring in more traffic and revenue online because, well, she's old school.

"She is still a fixture of the old media world. Regardless of how willing she is to shed her skin and embrace new ways, the world still mostly sees her in the over-familiar constructs of 'anchor' and 'talk-show host.'"

And what about Couric's daytime talk show, "Katie"? Media writers speculate the show could be canned because of less-than-favorable ratings, but The Hollywood Reporter added no decision will be made about the show's future until sometime in Dec.

An ABC News exec told Deadline "Katie is an incredible journalist and this was an opportunity that she couldn’t pass up. Thanks to the powerful association between ABC News and Yahoo we know that Katie will continue to work closely with us and welcome her on our air anytime."

No official word yet from Yahoo! or Couric herself on the reported new deal.