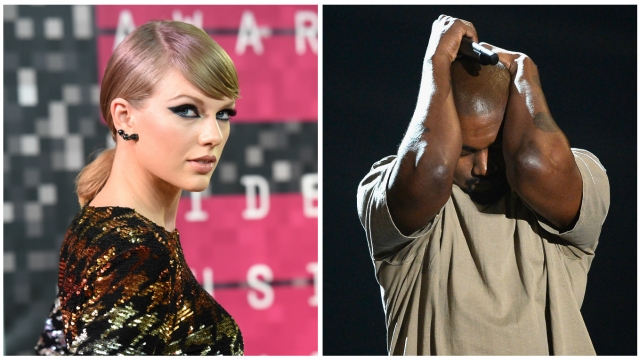 SMS
Kanye Vs. T-Swift: It's 2009 All Over Again
By Cody LaGrow
By Cody LaGrow
February 12, 2016
Kanye West's new track "Famous" is aimed at Taylor Swift, and she fired back, saying the lyrics have a "strong misogynistic message."
SHOW TRANSCRIPT

What could Kanye West have said that would motivate Taylor Swift's brother to throw away the Yeezy sneakers designed by the rapper himself?

Oh, you know. Perhaps that Kanye's lyrics hint that he might still have sex with one of the most famous pop stars in the world and that he alone is the reason Swift's famous in the first place. It's so Kanye.

It all started when West premiered his new album "The Life of Pablo" at his fashion show in New York. In the song "Famous," he rapped, "I feel like me and Taylor might still have sex. Why? I made that b**** famous."

There's a bunch of "he said, she said" floating around as to whether Swift was aware of the song. But on Thursday night, Swift's rep released this statement:

"Kanye did not call for approval, but to ask Taylor to release his single 'Famous' on her Twitter account. She declined and cautioned him about releasing a song with such a strong misogynistic message. Taylor was never made aware of the actual lyric."

Friday morning, West took to Twitter in a 15-part rant that claims Swift knew about the lyric, was fine with it and that situations like these are the reason music is now watered down. He tweeted he misses that "DMX feeling."

In the past two weeks, West's behavior on the World Wide Web has been somewhat unpredictable. He's expressed support for Bill Cosby and got into an epic but NSFW fight with his ex-girlfriend, Amber Rose, and Wiz Khalifa.

And as soon as Swift's squad became aware of the new bad blood, supermodel Gigi Hadid tweeted about her loyalty, Jaime King said she was disappointed, and don't forget about those thousand-dollar sneakers that Austin Swift trashed.

Perhaps, Kanye's antics on Twitter over the past two weeks are best summed up by Ruby Rose. She tweeted: "Too many lines crossed. If I put myself in the shoes of the women he has hurt recently. Victims of Bill Cosby, The Slut shaming, Amber. And now my dear friend Taylor.. Right before another huge moment for her.. Can I still support him and call myself a feminist? A friend? No."

Swift is set to open the Grammys on Monday night where she is also nominated for seven awards, including Album of the Year.

Oddly enough, the 2015 Grammys was when we first saw Swift and West finally squash the beef from the 2009 MTV VMA interruption heard 'round the world, or as Kanye sees it, the moment he made her famous ... after she had just beat Beyonce for an award.

Yes, Kanye. That was all you.