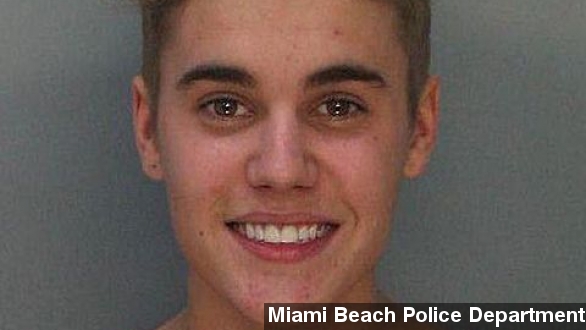 By Christine Slusser
January 30, 2014
Justin Bieber's toxicology report is back, and the superstar tested positive for Xanax, THC and marijuana.
SHOW TRANSCRIPT

The Canadian pop star who has turned so many into Beliebers might no longer be quite the role model once was, at least according to his toxicology report.

"It came back that he had Xanax, THC and marijuana in his system but then tested negative for cocaine and opiates and all the other stuff, all other drugs. However, this is consistent with the police report." (Via WFLD)

Bieber was pulled over Jan. 23 after a Miami police officer suspected he was drag racing. Bieber reportedly reeked of marijuana.

The Miami Herald points out Bieber was not drunk and has "pleaded not guilty to charges of driving under the influence, resisting arrest and driving with a suspended license."

Despite this, TMZ reports police say Bieber was "cocky" and "profane" after his arrest. The Biebs was reportedly out of it and had difficulty following basic instructions, authorities say.

However, Justin Bieber is getting some sympathy. Julie Chen, host of CBS' "The Talk," asked if we've all been too hard on the crooner, considering he's just a teenager. The audience shouted, "No!," but Sharon Osbourne disagreed.

"I've been very hard on him, probably because of my experience in the industry seeing people like him come and go, and especially with pop music."

Osbourne said it was her son who made her see the light by telling her to go easy on Biebs and look back at what her kids were doing at his age. She concluded we should "go cool" on him.