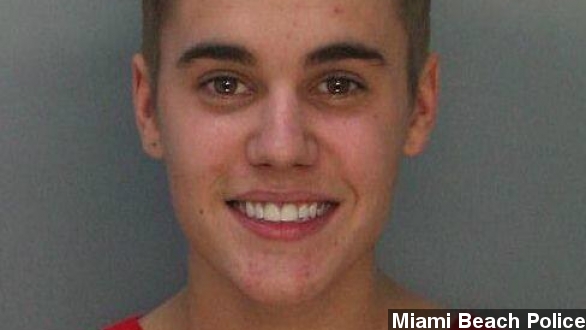 Justin Bieber was arrested in the early hours of Thursday morning.

According to TMZ, Bieber, who is only 19 years old, was taken into police custody, where officers reportedly tested him to get a precise measurement of his blood alcohol level.

The Miami Beach Police Department has actually been all over the story on Twitter — Tweeting the Biebs' mugshot at him. Quite the grin.

They've also Tweeted out his arrest report. Biebs was going 55-60 mph in a 30 mph zone, and dropped multiple 'f' bombs at police.

And Bieber reportedly admitted to police he was under the influence of alcohol, marijuana and prescription drugs. (Via ABC)

The Miami Herald reports the singer was at a Miami Beach club Wednesday night and was driving a Lamborghini when police pulled him over.

Bieber was spotted in different places around town during the week, including this skate park in a photo posted to his Instagram. (Via Instagram / justinbieber)

This arrest is just the latest in a string of Bieber's run-ins with the law, and it has his family and friends worried.

Bieber's mother told the The Sun Wednesday she prays for her son every day and asked his fans to do the same during "these trying times."

Back in November Bieber's manager, Scooter Braun, told The Hollywood Reporter he was worried about Bieber, saying he's "usually up pretty much all night until I know Justin is in."

Braun also said he was ​"prepared for what may come" with the morning news. Hopefully that's true in this case as well.